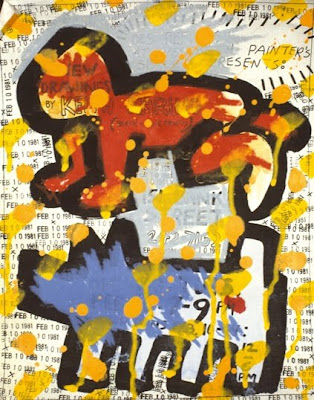 Keith Haring: 1978-1982, the first large-scale exhibition to explore the early career of one of the best-known of American twentieth-century artists, will be presented at the Brooklyn Museum from April 13 through August 5, 2012. Tracing the development of the artist’s extraordinary visual vocabulary, the exhibition includes 155 works on paper, numerous experimental videos, and over 150 archival objects, including rarely seen sketchbooks, journals, exhibition flyers, posters, subway drawings, and documentary photographs.

Organized by the Contemporary Arts Center, Cincinnati, Ohio, by Raphaela Platow, Director and Chief Curator, and the Kunsthalle Wien, Austria, the Brooklyn presentation will be coordinated by Associate Curator of Photography Patrick Amsellem.

The exhibition chronicles the period in Keith Haring’s career from the time he left his home in Pennsylvania and his arrival in New York City to attend the School of Visual Arts, through the years when he started his studio practice and began making public and political art on the city streets. Immersing himself in New York’s downtown culture, he quickly became a fixture on the artistic scene, befriending other artists such as Jean-Michel Basquiat and Kenny Scharf, as well as many of the most innovative musicians, poets, performance artists, and writers of the period. Also explored in the exhibition is how these relationships played a critical role in Haring’s development as a facilitator of group exhibitions and performances and, as a creator of strategies for positioning his work directly in the public eye.

Included in Keith Haring: 1978-1982 are a number of very early works that had previously never before been seen in public, twenty-five red gouache works on paper of geometric forms assembled in various combinations to create patterns- seven video pieces, including his very first, Haring Paints Himself into a Corner, in which he paints to the music of the band Devo, and Tribute to Gloria Vanderbilt- and collages created from cut-up fragments of his own writing, history textbooks, and newspapers that closely relate to collage flyers he created with a Xerox machine.

In 1978, when he enrolled in the School of Visual Arts, Keith Haring began to develop a personal visual aesthetic inspired by New York City architecture, pre-Columbian and African design, dance music, and the works of artists as diverse as Alechinsky, Dubuffet, Picasso, Willem deKooning, and Jackson Pollock. Much influenced by the gestural brushwork and symbolic forms of the abstract expressionists, his earliest work investigated patterns made of geometric forms, which evolved as he made new discoveries through experimentation with shape and line as well as the media. He meticulously documented his aesthetic discoveries in his journals through precise notes and illustrations. In 1980 he introduced the figurative drawings that included much of the iconography he was to use for the rest of his life, such as the standing figure, crawling baby, pyramid, dog, flying saucer, radio, nuclear reactor, bird, and dolphin, enhanced with radiating lines suggestive of movement or flows of energy.

The exhibition also explores Haring’s role as a curator in facilitating performances and exhibitions of work by other artists pursuing unconventional locations for shows that often lasted only one night. The flyers he created to advertise these events remain as documentation of his curatorial practice. Also examined is Haring’s activity in public spaces, including the anonymous works that first drew him to the attention of the public, figures drawn in chalk on pieces of black paper used to cover old advertisements on the walls of New York City subway stations.

Keith Haring died in 1990 from AIDS-related complications. His goal of creating art for everyone has inspired the contemporary practice of street art and his influence may be seen in the work of such artists as Banksy, Barry McGee, Shepard Fairey, and SWOON, as well as in fashion, product design, and in the numerous remaining public murals that he created around the world.