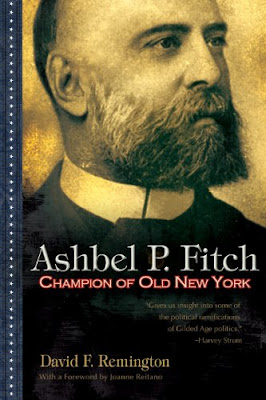 The concept of an &#8220honest Tammany man&#8221 sounds like an oxymoron, but it became a reality in the curious career of Ashbel P. Fitch, who served New York City as a four-term congressman and a one-term city comptroller during the late nineteenth century. Although little known today, Fitch was well respected in his own day and played a pivotal role on both national and local stages. Born in Northern New York, he was once challenged to a duel by an impulsive Theodore Roosevelt.

In the U.S. Congress, Fitch was a passionate advocate of New York City. His support of tariff reform and his efforts to have New York City chosen as the site for an 1892 World Exposition reflected his deep interest in issues of industrialization and urbanization. An ardent defender of immigrant rights, Fitch opposed the xenophobia of the times and championed cosmopolitan diversity.

As New York’s comptroller, he oversaw the city’s finances during a time of terrible economic distress, withstanding threats from Tammany Hall on one side and from Mayor William L. Strong’s misguided reform administration on the other. In Ashbel P. Fitch, Remington succeeds in illuminating the independence and integrity of this unsung hero against the backdrop of the Gilded Age’s corrupt politics and fierce party loyalty.

David F. Remington is a retired investment banker and amateur historian. He is the great grandson of Ashbel P. Fitch. He lives with his wife on the coast of Maine.