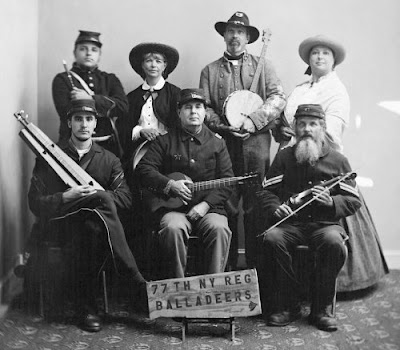 The 77th New York Regimental Balladeers will present a free concert of music popular during the Civil War along with letters and commentary from and about the war. The music starts at 2 PM on the East Lawn at Olana State Historic Site on Saturday, August 13, 2011. There is a $5 per car fee at the entrance to the park- bring your own blankets and chairs- the concert is from 2 – 4 PM.

The 77th New York has appeared many times at Olana, each time to an enthusiastic response. This year, their performance is part of the Sesquicentennial observances of the Civil War taking place throughout the country. The 77th New York will provide a look at the war from a musical perspective. Dressed in authentic reproductions of historic uniforms and costumes, the 77th New York provides a musical and narrative story of both sides in the painful and bloody conflict

The Civil War is of importance to Olana because of its relevance to Frederic Church, his art, and his family. While Church did not fight in the Civil War, he supported it financially- some of his greatest works, like Icebergs and Cotopaxi, were produced during this time. He and his family, like so many in this country, suffered the deaths of dear friends in the conflict. Long time friend and author Theodore Winthrop was lost in one of the first battles of the war- later friend and fellow Connecticut artist John Jameson died at the infamous Andersonville prison camp.

Currently, an exhibit, Rally ‘round the Flag: Frederic Edwin Church and the Civil War, is featured in the Evelyn and Maurice Sharp Gallery. The exhibit explores the Civil War connection to the artist and the country- it also provides a look at the paintings and a career cut short by the conflict, the works of Church’s young friend and artist, John Jamison.