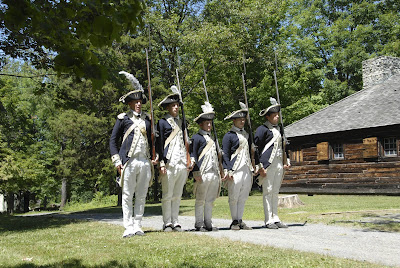 Over 7,000 Continental Army soldiers and 500 of their family members encamped at New Windsor, New York, during the winter of 1782-83. “A Blast from the Past” will recall that encampment at the New Windsor Cantonment & Knox’s Headquarters, on Saturday September 24th, Museum Day & a Hudson River Valley Ramble Weekend

At 2:00 PM, Revolutionary War soldiers perform a military demonstration and fire a cannon. A gallery tour will follow the demonstration. From 3:30 to 4:30 PM tour the nearby 1754 Ellison House, Knox’s Headquarters. New Windsor Cantonment State Historic Site is co-located with the National Purple Heart Hall of Honor on Route 300, 374 Temple Hill Road, in New Windsor, NY, just three miles south of the intersection of I-87 and I-84. Knox’s Headquarters is located at 289 Forge Hill Road in Vails Gate, New York. For more information please call (845) 561-1765 ext. 22.

When 300 soldiers from the 2nd and 3rd Continental Artillery Regiments established a winter encampment at New Windsor, New York, in November 1780, American fortunes were at their lowest ebb. The previous spring, their southern army had surrendered to British forces at Charleston, South Carolina and a second army sent from the north was routed at Camden, northwest of modern Columbia. In September, Benedict Arnold’s treason shook what little confidence Americans still had in the nation’s leadership. The alliance with France produced little, but discord, the country’s finances were in shambles and the growing number of mutinies exposed the fact that the American soldiers’ often-praised perseverance was starting to waver.

When the artillerymen marched out of New Windsor, in June 1781, some of their number would assist in compelling over 8,000 British soldiers and sailors at Yorktown Virginia to surrender, in October. American joy following the victory at Yorktown was short-lived, however, because the British still controlled Maine, New York City, Wilmington, Charleston and Savannah. At the end of October 1782, the Continental Army returned to New Windsor with 7,500 soldiers. They built a city of log huts which they occupied until June 1783. American finances remained precarious. Resentful of past mistreatment and the nation’s unfulfilled promises, the officers and soldiers looked to the future with growing uncertainty. Only by a personal appeal to his officers, at New Windsor, did Washington prevent a possible mutiny.