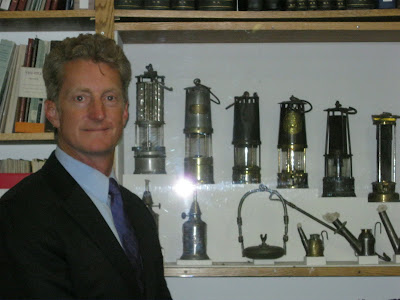 The Albany Institute of History & Art has announced that David Carroll has been selected as its next Director, succeeding Christine Miles who announced in January her intention to resign from the Institute once a new Director is in place.

“I am honored to have been selected to serve the Albany Institute of History and Art as its next Director,&#8221 says Carroll. &#8220The Institute has an impressive history of bringing exciting and relevant programs to this region and I look forward to working with the Board and talented staff to advance this important work.”

David Carroll has held the position of Executive Director for the Western Museum of Mining and Industry in Colorado Springs, Colorado since 2005. Prior to that, Carroll held positions of Director of Membership at the Art Institute of Chicago, Director of Development at the Museum of Contemporary Photography, Chicago and Associate Director of Administration at the Indiana University Art Museum, which provides him a range of valuable experience.

Most recently as the Executive Director of the Western Museum of Mining & Industry, Carroll has dramatically increased membership and attendance as well as transformed donor relationships which greatly increased grant support and annual giving. Under his leadership, this museum has expanded its educational programming and become a significant partner in the tourism of the Pike’s Peak region. He has served on numerous state and local commissions and committees involving heritage tourism, art, and history throughout his career. Carroll received his B.S. in Management Information Systems from Colorado State University in 1988, followed by a M.A. in Arts Administration from Indiana University in 1997.

“What really set Carroll apart beyond his energy was his passion for storytelling,” tells George R. Hearst III, Chair of the Albany Institute Board of Trustees. “In line with the Albany Institute’s own mission, Carroll understands how to integrate objects and exhibitions into the context of the local environment, which he has done successfully at the Western Museum of Mining and Industry. As his skills complement areas where the Institute already has strength, there will be a very solid team in place under Carroll’s leadership.”

The process of recruiting a new Director commenced in January with the appointment of a Search Committee, comprised of Trustees and members of the community, and the hiring of a national recruitment firm. Ultimately, the Albany Institute Search Committee selected Carroll from a field of 38 candidates from across the country including Hawaii, Maine, Connecticut, North Carolina, Arkansas, and Colorado. Carroll impressed the Search Committee with his appreciation for the relationship between history and art, which is essential to the Institute’s mission. Additionally, he recognized the importance between an institution and its role in the community.

“We were very fortunate to have such a group of high-quality candidates from all over the country,” says Rosemarie V. Rosen, Chair of the Search Committee and Vice Chair of the Board of Trustees. “David is very special and brings us a unique mix of technical and creative skills. In addition, he has a real enthusiasm and excitement and will be a tremendous asset as we build the future of the Institute.”

“Speaking for myself and our entire staff, I am delighted and excited about the Albany Institute’s choice of David Carroll as the next Director of the Albany Institute,” says current Director Christine Miles. “David brings with him a refreshing approach and vision, great people-skills, and the invaluable experience of knowing how to engage the many publics that this museum serves every day.”