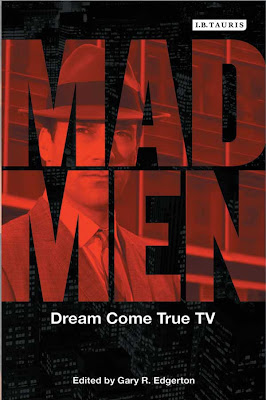 Since it premiered in July 2007, the AMC cable network’s &#8220Mad Men&#8221 series has won many awards and been syndicated across the globe. Its imprint is evident throughout contemporary culture—from TV advertisements and magazine covers to designer fashions and online debate. Its creator, Matthew Weiner, a former executive producer on &#8220The Sopranos,&#8221 has again created compelling, complex characters, this time in the sophisticated, go-go world of Madison Avenue of the 1960s, with smoking, drinking, and the playing out of prejudices and anxieties of an era long neglected in popular culture. As editor Gary R. Edgerton and a host of other well-known contributors demonstrate in this new title, Mad Men: Dream Come True TV, Mad Men is a zeitgeist show of the early twenty-first century.

Edgerton, who is Chair of the Communications and Theater Arts Department at Old Dominion University in Virginia, has edited this book to provide an academic yet still engaging read that sheds light on the appeal and attraction of the television series, as well as it’s cultural import.

The book is part of the Reading Contemporary Television Series which offers a variety of intellectually challenging responses to what is happening in television today. Other books in the series have tackled CSI, Deadwood, Desperate Housewives, Lost, Sex and the City, The L Word, Six Feet Under, The Sopranos, Doctor Who, 24 and more.

Gary R. Edgerton’s previous books have included The Essential HBO Reader (with Jeffrey P. Jones) and The Columbia History of American Television. He is co-editor of the Journal of Popular Film and Television.