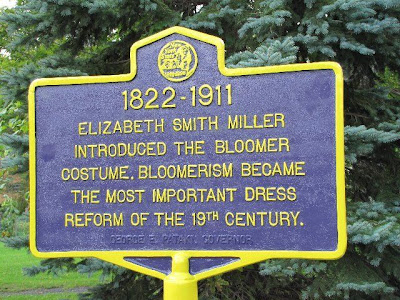 Dr. Judith Wellman, well known scholar and author on the history of women’s rights and the Underground Railroad, will be the keynote speaker on Sunday, September 25 at 12:30 p.m. at the Annual In the Kitchen Bloomer Tea held at the Smithfield Community Center in Peterboro to celebrate Elizabeth Smith Miller’s birthday and women’s rights heritage. Miller, daughter of Ann and Gerrit Smith, is credited with creating a trouser costume in the mid 1800s that became a symbol of the women’s movement.

Dr. Wellman, author of The Road to Seneca Falls, will describe Peterboro’s role in the women’s movement, including the influence of Gerrit and Ann Smith during the summers that Elizabeth Cady Stanton spent in Peterboro, the debates over dress reform, and the inclusion of women in the Liberty League convention. Wellman states, “Everybody knows about Elizabeth Cady Stanton and her work for women’s rights. But few people understand how important her cousins, Gerrit and Ann Smith and their daughter Elizabeth Smith Miller, were in shaping her reform agenda. Stanton and Elizabeth Smith Miller had a lifelong friendship, based on their shared sense of humor and their commitment to women’s rights (including dress reform). From Gerrit Smith, Stanton gained access to ideas and people at the highest levels of antislavery organization. (If you) want to hear the backstory of the Seneca Falls convention, come to this talk!”

Judith Wellman has worked as a consultant and principal investigator on award-winning projects with the National Park Service, the Mary Baker Eddy Library, the National Underground Railroad Freedom Center, the U. S. Department of Education, the Preservation League of New York State, the New York State Office of Historic Preservation, the New York Council for the Humanities, the Documentary Heritage Program of the New York State Archives, National Public Radio, the U.S. Department of Education, the Society for the Preservation of Weeksville and Bedford-Stuyvesant History, and a wide variety of local historical, genealogical, teachers, women’s, and preservation groups. She also regularly gives papers at major scholarly conventions, including the Organization of American Historians, Association for the Study of African American Life, and the National Council on Public History.

Wellman’s keynote Peterboro on the Road to Seneca Falls follows a tea catered by The Copper Turret of Morrisville NY and served by ladies attired in the Bloomer costume of Peterboro. Debra Kolsrud will describe ongoing history activities in Stanton’s hometown of Johnstown NY. Maxine Getty and Jody Luce will read Miller and Stanton letters. There will also be basket raffles and door prizes.

The tea is a presentation in a series of programs offered by the Gerrit Smith Estate National Historic Landmark in Peterboro made possible, in part, by a PACE grant from the Central New York Community Foundation. $35 reservations required by August 27. $40 reservations by September 17. Seating is limited. Send check to Smithfield Community Association (501c3) PO Box 42, Peterboro NY 13134 or visit www.inthekitchentea.com