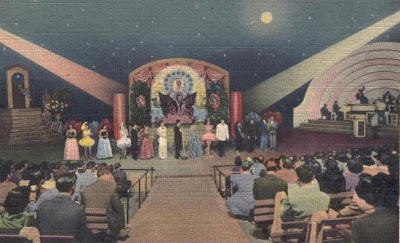 Adirondack Shakespeare Company (ADK Shakes) is returning to the Adirondack region for its second full Summer Festival Season. The company plans to follow last summer’s presentations of As You Like It, Romeo and Juliet and Macbeth with an all-new expanded season featuring ADK Shakes’ daring and adrenaline-fueled RAW performance style which strips the Bard down to the bare bones.

This year, the company will present A Midsummer Night’s Dream and The Merchant of Venice, along with The Complete Works of William Shakespeare (abridged) by Adam Long, Daniel Singer and Jess Winfield and Theseus and the Minotaur, an original children’s production by Sean Adams.

In addition to their full season, ADK Shakes has taken on a new challenge. The company is determined to revitalize the outdoor amphitheater at Scaroon Manor Day-Use Facility (formerly Taylor’s Point). This historic landmark was once a vibrant destination for locals as well as tourists looking to take in professional theatre amidst the beauty of the Adirondack Mountains. ADK Shakes’ Artistic Board has made it their mission to get the outdoor amphitheater on New York’s list of historic sites.

“One of the reasons we are looking to establish a Shakespeare company in the Adirondacks is to save this amazing outdoor amphitheater,” says Artistic Director Tara Bradway. The company’s plans to raise awareness during the course of the season include public presentations and petitions in the Adirondack region.

The Adirondack region tour of The Complete Works will begin July 4th, while the Mainstage Season opens July 21st and will run through August 7th. Performances of the children’s show Theseus and the Minotaur are set to run from July 27th through August 6th. Performances will take place primarily at the Boathouse Theater in Schroon Lake Village, as well as the Little Theater on the Farm in Fort Edward and LARAC Gallery in Glen Falls. Weather permitting, the final weekend of performances will be held at the outdoor amphitheater at Scaroon Manor.

This event is made possible, in part, with public funds from the New York State Council on the Arts Decentralization Program, administered locally by the Lower Adirondack Regional Arts Council. For more information, a full performance schedule and to purchase tickets, visit www.adkshakes.org. Email inquiries may be sent to [email protected]