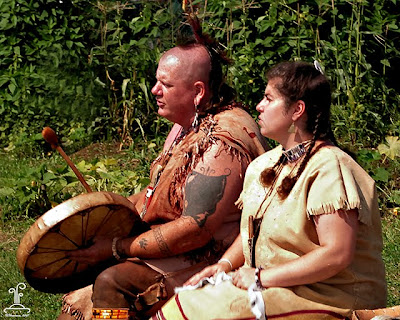 Members of the Elnu and Missisquoi Abenaki tribes, the Nulhegan Band of the Coosuk and Koasek Traditional Band of the Koas Abenaki Nation will gather will gather at Lake Champlain Maritime Museum for the annual celebration of the region’s Native American Heritage.

As in other years, tribal members dressed in garments like those worn by their ancestors over the centuries will demonstrate singing, drumming, basket making, quillwork and bead decoration, food preparation, and other life skills. This year official recognition by the State of Vermont was granted to the Elnu and Nulhegan on April 22, and other applications are pending. “A new dawn has risen,” said Nulhegan Chief Don Stevens. Video footage of the April 22 Recognition Day declaration and celebration will be screened during the LCMM event.

The Native people at the encampment are experts in living indigenous arts and traditions, which they expect to share, rather than sell. They have researched, reconstructed, or apprenticed to learn long-forgotten techniques and now are able to create outstanding beadwork, quillwork, basketry, pottery, woodworking and other items for personal use or commissioned pieces.

Cherished family stories and photographs provide the basis for a presentation by Koasek Chief Nancy Millette Doucet, who has recreated the clothing worn by an ancestor in the nineteenth century. The Koasek have also established a program to help preserve Abenaki as a living language. “I have been amazed by the richness and depth of the new cultural and historical information generated by the Vermont Indigenous bands in their research for applications for Vermont State Recognition,” says Frederick M. Wiseman, Ph. D., Director of the Wobanakik Heritage Center in Swanton. “This is a potential new stage in Vermont culture and history – for Native people to work on their own history and culture and then present the results.”

Lake Champlain Maritime Museum is located on the shore of Lake Champlain, seven scenic miles from historic Vergennes, Vermont at 4472 Basin Harbor Road, across from the Basin Harbor Club. The museum is open daily from 10 a.m. to 5 p.m. through October 16, 2011. All event activities are included with museum admission, LCMM Members, School Family Pass Members, and children 5 and under get in free. For information call (802) 475-2022 or visit www.lcmm.org.