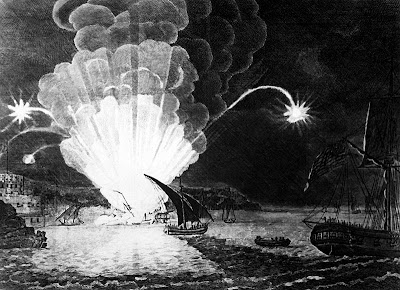 Last week the United States House of Representatives passed a bill including an amendment authored by U.S. Reps. Mike Rogers, (R-MI), and Frank LoBiondo, (R-NJ), that would require the Department of Defense to repatriate the remains of 13 US Navy commandos buried in two mass graves in Tripoli, Libya since 1804.

The amendment &#8211 which would repatriate, identify and honor the sailors with a military funeral &#8211 was attached to the National Defense Authorization Act (NDAA). After passing the full House, the NDAA now heads to the US Senate for consideration.

&#8220My father, my father’s father, and his father’s father have wanted the remains of Master Commandant Richard Somers returned home, and we’ve worked for it since he and the men of the USS Intrepid were lost in Libya in 1804,&#8221 said Dean Somers of Somers Point, New Jersey. &#8220This is long, long overdue, and it wasn’t until we met recently with Rep. Frank Lobiondo and Chairman Rogers when we thought it was finally possible.&#8221

Somers and his crew were lost on an ill-fated mission to destroy Tripoli’s naval fleet during the Barbary Wars of the early 19th century. When their bodies of America’s first Navy commandos washed up on the beach in Tripoli, the bashaw &#8211 the king of the pirates &#8211 invited a pack of dogs to devour them as American prisoners of war looked on. The 13 remain buried today jumbled together in two Libyan graves. One of those graves is unmarked and underfoot on Green Square, the site of decades of anti-America rallies.

On September 4th 1804, Somers was in command of fire ship Intrepid which had been recently seized from its Tripolean crew, was prepared as a &#8220floating volcano&#8221 and readied to be sailed into Tripoli harbor and blown up in the midst of the enemy fleet under the walls of the city. She exploded prematurely, while entering the harbor killing Somers and his entire crew of volunteers.

Since 1804, there have been six ships of the US Navy that have been named USS Somers in his honor. In 2004, the state assembly in New Jersey passed two resolutions calling for the return of the sailor’s remains. The town of Somers, New York, located in Westchester County is named in his honor.

The City of Somers Point, named after the Master Commandant’s family and still their residence, has worked on repatriation for decades. Additionally, the descendants of American poet Henry Wadsworth Longfellow wish for the return of the remains of his uncle, Lt. Henry Wadsworth, who served as second in command on the fire ship Intrepid when it was lost during the Barbary Wars. Born shortly after the failed mission, the legendary poet was named after his heroic uncle.

Illustration: Engraving, &#8220Blowing Up of the Fire Ship Intrepid commanded by Capt. Somers in the Harbour of Tripoli on the night of 4th Sepr. 1804.&#8221