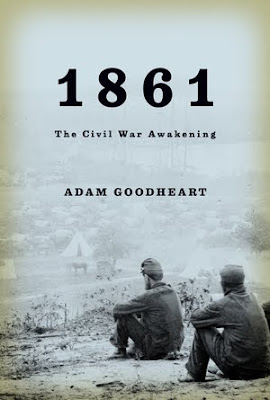 Members of the Cayuga Museum’s History Book Club met recently to choose books for the next six months. The History Book Club meets on the first Thursday of the month, at 7:00 p.m., at the Museum. Members discuss non-fiction works of history on local, national and global themes. Participation is free and readers can choose to attend any or all of the monthly meetings.

June 2: 1861 by Adam Goodheart
Like many of the best works of history, 1861 creates the uncanny illusion that the reader has stepped into a time machine…Goodheart’s version is at once more panoramic and more intimate than most standard accounts, and more inspiring. This is fundamentally a history of hearts and minds, rather than of legislative bills and battles.

July 7: Empire of the Summer Moon: Quanah Parker and the Rise and Fall of the Comanches, the Most Powerful Indian Tribe in American History by S. C. Gwynne
Gwynne doesn’t merely retell the story of Parker’s life. He pulls his readers through an American frontier roiling with extreme violence, political intrigue, bravery, anguish, corruption, love, knives, rifles and arrows. Lots and lots of arrows.

August 4: There Is Power in a Union: The Epic Story of Labor in America by Philip Dray
An epic, character-driven narrative that locates this struggle for security and dignity in all its various settings: on picket lines and in union halls, jails, assembly lines, corporate boardrooms, the courts, the halls of Congress, and the White House. The author demonstrates the urgency of the fight for fairness and economic democracy—a struggle that remains especially urgent today, when ordinary Americans are so anxious and beset by eco­nomic woes.

September 1: Confederates in the Attic: Dispatches from the Unfinished Civil War by Tony Horwitz

A Pulitzer Prize-winning journalist takes an eye-opening turn in the South, where his childhood obsession with the Confederacy collides with hard adult realities about race and culture in America. Returning home after a decade spent covering foreign wars, he launches a year-long ramble through the landscape of the Civil War, traveling from Virginia to Alabama in search of explanations for his (and America’s) continuing interest in the conflict.

October 6: Triangle: The Fire that Changed America by David von Drehle.
Explains the sociopolitical context in which the fire occurred and the subsequent successful push for industry reforms. A fascinating, meticulously documented account of a crucial period in U.S. history.

November 3: Don’t Know Much About History: Everything You Need to Know About American History But Never Learned by Kenneth C. Davis
From the arrival of Columbus through the bizarre election of 2000 and beyond, Davis carries readers on a rollicking ride through more than 500 years of American history. In this updated edition of the classic anti-textbook, he debunks, recounts, and serves up the real story behind the myths and fallacies of American history.

Note: Purchases made through this Amazon link help support this site.