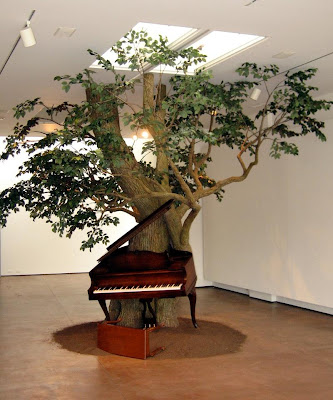 &#8220Sanford Biggers: Sweet Funk-An Introspective&#8221 challenges and reinterprets symbols and legacies that inform contemporary America in a focused selection of eight installations and five additional artworks created by the New York-based artist. On view September 23, 2011, through January 8, 2012, this will be Biggers’ first museum presentation in New York, and it will mark the Brooklyn debut of his Blossom (2007), a large-scale multimedia installation.

Sanford Biggers employs a variety of media, and his work incorporates references to a range of artistic and cultural traditions. The focal point of the Brooklyn Museum exhibition, Blossom (2007), is composed of a large tree that grows through, and uproots, a grand piano. At various intervals, the keys move as the piano plays the artist’s arrangement of &#8220Strange Fruit,&#8221 a song first recorded in 1939 by the blues singer Billie Holiday.

In Biggers’ work, the tree suggests multiple, divergent ideas and references, some of them horrifying, such as lynchings and other race crimes that the 1930s song movingly protested. But other references are positive, such as Buddha’s finding enlightenment while sitting under the bodhi tree. Addressing the historical and cultural landscape, Blossom, which was recently acquired by the Brooklyn Museum, also references the ideologically tinged landscapes by artists such as Alfred Bierstadt and Frederic Church.

Blossom will occupy the center of the Museum’s fifth-floor Rotunda (the Iris and B. Gerald Cantor Gallery), where it will be presented along with eight other, thematically related installations. One of Biggers’ earliest videos, Bittersweet the Fruit (2002) introduces the imagery of tree, piano, and black male subject. Cheshire (2008), a sculptural installation, alludes to the disembodied smile of the cat in Alice in Wonderland as well as to the caricatured wide grin associated with blackface minstrelsy. The video installation Cheshire (2007) presents a sequence of professionally attired African American men who each attempt to climb a large tree. The installation Kalimba II (2002), named after an African percussion instrument, incorporates a piano that has been cut in two by a wall- a bench invites the visitor to sit down and play half of the keyboard, initiating a dialogue/duet with an unseen visitor on the other side of the wall.

Another related installation is a large glass disc, titled Lotus (2007) that refers to the Buddhist symbol but also to the slave trade: etched in glass, the filigree pattern contained in each petal of the lotus flower is made up of diagrams of the placement of human bodies in the cargo hold of an eighteenth-century slave ship. The remaining installations include Shuffle (2009), a video installation that explores the shifting identities of the main protagonist- Calenda (Big Ass Bang) (2004), a dance diagram affixed to the floor and walls that evokes both a cosmic explosion and codified dance forms- and Passage (2009), an altered portrait bust of Martin Luther King Jr. that casts a large shadow, a silhouette of Barack Obama, on the wall.

Sanford Biggers has been creating installations and performances for more than fifteen years. He now works and lives in New York City. Originally from Los Angeles, he attended Morehouse College in Atlanta, earning his B.A., and then the School of the Art Institute of Chicago, completing his M.F.A. He was the recipient of a Creative Time Global Residency grant, which took him to Brazil in 2009. Biggers joined the faculty of Columbia University in January 2010. He was also part of the affiliate faculty at the Virginia Commonwealth University and spent a year as a visiting scholar and resident artist at Harvard University.

Sanford Biggers: Sweet Funk-An Introspective is organized by Eugenie Tsai, John and Barbara Vogelstein Curator of Contemporary Art at the Brooklyn Museum. The exhibition will be accompanied by an illustrated catalogue with an introduction by Eugenie Tsai and an essay by the critic Gregory Volk. The Museum is coordinating this exhibition with the Sculpture Center, in Long Island City, Queens, which will host a concurrent exhibition of new work by Biggers.