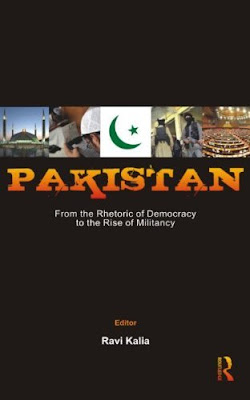 Since its inception 64 years ago, Pakistan’s quest for democracy has been tenuous. In Pakistan: From the Rhetoric of Democracy to the Rise of Militancy, edited by Dr. Ravi Kalia, professor of history at The City College of New York, readers get an idea of why.

Published by Routledge (2011), the book comprises essays by scholars and diplomats from three continents. They reflect on the political, social, military and urban history of Pakistan with focus on its search for democracy as well as its pivotal role in the global war on terror. It is the only non-NATO country aligned with the United States in the war on terror.

Pakistan was carved out of British India in 1947 as a homeland for Indian Muslims and has alternated between military and civilian rule since. While the political rhetoric by successive leaders from both sides has indicated a desire for democracy, liberalism, freedom of expression and other such progressive concepts, the reality has been starkly different.

Instead, the world’s sixth most populous nation, nuclear-armed with a population exceeding 170 million, has continued to drift towards increasing authoritarianism, religious extremism and intolerance against minorities.

“This chasm between animated political rhetoric and grim political reality has baffled the world as much as Pakistanis themselves,” said Professor Kalia, an expert in South Asian studies. “In this volume, scholars and practitioners of statecraft from around the world have sought to explain the dichotomy that exists between the rhetoric and the reality.”

A major obstacle to democracy highlighted by Professor Kalia is a society based on powerful tribal loyalties and kinship associations.

“Pakistani institutions operate on the premise of tribal loyalty and kinship and while these help keep the country together, they hinder its transition into the 21st century. The military is the only entity that bares any resemblance to a western institution,” he said.

Contributors to the book are:

Dr. Gilles Boquerat, head of the South Asia program at the French Institute of International Relations in Paris.

A graduate of the University of Delhi (BA Hons., MA) and University of California-Los Angeles (MBA, PhD), Professor Kalia specializes in South Asian studies. His focus is urban-architectural history in colonial and post-colonial India. His books include “Chandigarh: The Making of an Indian City” (Southern Illinois Univ. Press & Oxford Univ.Press, 1987- revised, 1999), “Bhubaneshwar: From a Temple Town to a Capital City” (Southern Illinois Univ. Press & Oxford Univ. Press, 1994), and “Gandhinagar: Building National Identity in Postcolonial India” (Univ. of South Carolina Press & Oxford Univ. Press, 2004). Professor Kalia has been published in numerous journals including “Habitat International,” “India Quarterly,” “Journal of Urban History,” “The Encyclopedia of Conflicts Since World War II” (2006), as well as many international newspapers. He’s the recipient of three Fulbright scholarships and numerous other research awards.