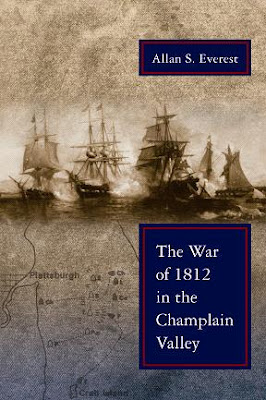 As the 200th anniversary approaches, there will be a steady stream of new books about the War of 1812. But for readers interested in the effects of the war on the ground in the Champlain Valley, there remains just one foundational text, now available for the first time in paper by Syracuse University Press. Although first issued in 1981, Allan S. Everest’s The War of 1812 in the Champlain Valley is still required reading for those hoping to understand the Plattsburgh campaign, considered critical to the war.

The War of 1812, ranks with the often overlooked American conflicts of the 19th century, but unlike the Mexican-American War (1846-1848) or the Spanish-American War (1898-1902), the War of 1812 really was a Second War for Independence. America stood at the other side of Britain’s own Manifest Destiny, the homes, farms, property, and lives of Americans in the Champlain Valley stood in the middle.


The first months of 1814 spelled gloom for America, then only 35 years old. The war against England was stalled. The British continued to kidnap and impress American for service on their warships. They supported Native Americans who attacked outposts and settlements on the American frontier. American harbors were blockaded by the British and New England, never sympathetic with the narrow vote of Congress for war, had become openly hostile and was threatening to secede.

Still worse, Napoleon had been defeated in Europe and Britain could now devote more time and effort to America. The British saw an opportunity to split the new American republic and once again take control of sections of the young colonies. The bold plan called for a combined army and naval strike at Plattsburgh, followed by a drive down the lake and through the Hudson Valley to New York City, splitting the colonies in two. The Americans saw that opportunity too.

The Navy Department contracted Noah Brown, one of New York’s finest shipwrights, to build a fleet to protect the way south from Canada along Lake Champlain. In less than two months, Brown constructed, armed, and launched a total of six of war ships: Allen, Borer, Burrows, Centipede, Nettie, and Viper. With the help of the small Vermont town of Vergennes and its iron foundry that could supply spikes, bolts, and shot, and it’s water-powered sawmills, and surrounding forests filled with white oak and pine for ship timber, Brown built the 26-gun flagship Saratoga, in just 40 days, and commandeered the unfinished steamboat and completed it as the 17-gun schooner Ticonderoga.

Vastly out-manned and outgunned on both land and sea, a rag tag inexperienced group of 1,500 Americans commanded by Capt. Thomas Macdonough met the greatest army and naval power on earth. Because of a serious shortage of sailors for his fleet, he drafted U.S. Army soldiers, band musicians, and convicts serving on an army chain gang to man the ships.

Their leader Macdonough had some experience. He had served against the Barbary pirates in North Africa, but two decades of warfare had given the British considerably more experience. It had for instance, led to the promotion of officers by merit, rather than by purchase or birth. As a result the British forces were the best trained and most experienced in the world and they enjoyed the backing of the world’s greatest military power. Sir George Prevost led the large British army and its fleet into New York and down Lake Champlain to meet the Americans. But what happened that September 11th no one could have predicted.

By the end of the day, the U.S. had achieved the complete and unconditional surrender of the entire British fleet and the full retreat of all British land forces. More importantly, the American victory at Plattsburgh helped persuade the British to end the war.

That’s the bigger story, but the local story is the strength of Allan Everest’s history. As a professor of history at SUNY Plattsburgh, and the author of Moses Hazen and the Canadian Refugees in the American Revolution, Our North Country Heritage, and the seminal book on the region’s prohibition history drawn from local interviewees, Rum Across the Border, Everest had a grasp of the topography of the region’s political, social, and cultural history.

Over some two and a half years, the region saw armies raised, defeated, and disbanded, including their own militia, which was repeatedly called out to protect the border areas and to serve under regular army units. Everest catalogs the political and military rivalries, and the series of disheartening defeats, loss of life, and destruction of property and markets resiliently borne by local people, who were forced to flee when battle threatened, and returned to rebuild their lives.

2001&#8242-s The Final Invasion: Plattsburgh, the War of 1812’s Most Decisive Victory painted with a broader brush and suffered criticism for misunderstanding the Plattsburgh campaign. As a result, Everest’s 30-year-old work &#8211 despite its age &#8211 is still the definitive work on the impact of the War of 1812 on northern New York.