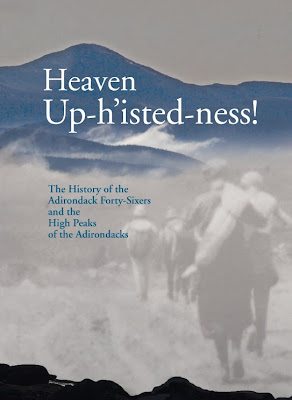 Part meticulously footnoted history of the mountains, trails, and the club itself, and part trail guide, this new volume is a landmark in Adirondack history. Heaven Up-h’isted-ness! is a long-awaited update of Russell Carson’s Peaks and Peoples of the Adirondacks, first published in 1927.

The book is a bit of an homage to the popularity of Carson’s earlier work and the three subsequent 46er volumes that followed, as much as it is to the 46er legends who grace it’s pages. Jim Goodwin’s son Tony Goodwin offers an Introduction that provides insight into why this book is so important. With a hat tip to Carson, who was instrumental in spreading the 46er gospel and &#8220who research gave life to the peaks we all climb&#8221, Goodwin points out that new research opportunities and the rich history since the 1920s &#8220has allowed authors to provide the reader with the most comprehensive histories of the peaks ever written.&#8221 I agree.

In a series of in-depth profiles of each of the 46 High Peaks, each author draws on a range of sources from reports, journals, and diaries of the explorers, scientists, philosophers, writers, and other anecdotes describe the geology, history, flora, and fauna. The book is illustrated with a remarkable collection of over 150 photos and illustrations.

It’s not all high peaks. In a substantial first section Suzanne Lance surveys the history of the Adirondack 46ers beginning in 1918 with Bob and George Marshall and their guide Herb Clark, who was recognized with the first spot in 1939 when &#8220the list&#8221 was created. The full roster of 46ers now includes more than 7,000.

The strength of this section is in illuminating the contributions of folks like Ed Hudowalski (#6), Grace Hudowalski (#9), and the Troy minister Ernest Ryder (#7), but also the recognition and response of the club to the impacts of the many Adirondack peak-baggers they helped inspire.

By the 1970s, as visitors began to flood into the High Peaks, Glenn Fish (#536) and Edwin &#8220Ketch&#8221 Ketchledge (#507) helped shepherd the club away from its strictly social approach toward a stewardship role. Summit ecology and alpine environments, wilderness conservation education, trail maintenance and management, and search and rescue have all benefited from the subsequent efforts of dedicated Adirondack 46ers.

Until you get your copy, you’ll have to settle with this short excerpt on the formation of the Forty-Sixers of Troy:

During the early 1930s Bob Marshall’s booklet, “The High Peaks of the Adirondacks,” and Russell Carson’s Peaks and People of the Adirondacks captured the attention of a small group of outdoor enthusiasts from Grace Methodist Church in Troy, in particular the church’s pastor, the Rev. Ernest Ryder (#7), and two parishioners, Grace Hudowalski (#9) and Edward Hudowalski (#6)…. Ed and the Rev. Ryder had not, originally, intended to climb all 46. According to Ed, their goal was 25 peaks, but when they hit 27 “by accident,” they decided to climb 30. After reaching 30 they decided to climb all of them. The two finished arm-in-arm on Dix in the pouring rain on September 13, 1936. They shared a prayer of praise and thanks for their accomplishment.

Less than six months after the Rev. Ryder and Ed finished their 46, the duo organized a club, comprised mainly of Ed Hudowalski’s Sunday School class, known as the Forty-Sixers of Troy. It was Ryder who coined the name “Forty-Sixer.” The term first appeared in print in an article in the Troy Record newspaper in 1937 announcing the formation of the hiking club: “Troy has its first mountain climbing club, all officers of which have climbed more than thirty of the major peaks in the Adirondacks. The club recently organized will be known as the Forty-sixers&#8230-