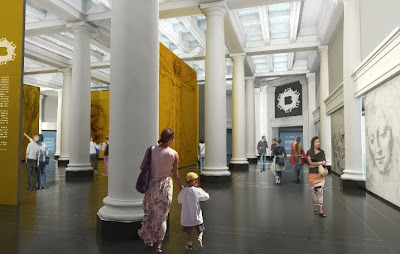 The Brooklyn Museum has completed an extensive renovation of its historic Great Hall at the center of its ground floor and has reclaimed additional space for a new gallery. This project, which is the initial phase of a major redesign of the first floor, marks the most transformative change to the floor since that portion of the Museum was constructed in the early twentieth century. The renovated space has been redesigned by the award-winning studio Ennead Architects, formerly known as Polshek Partnership. Ennead has been the architectural firm responsible for the transformation of the Museum over the past twenty-five years.

According to Arnold L. Lehman, Museum Director, &#8220This major rethinking of the nineteenth-century McKim, Mead & White architecture will completely alter and enhance the experience of every visitor in a way that makes for a more exciting and logical introduction to the Museum. Because only one-sixth of the original design for the building was completed, circulation on the first floor has always presented a navigational challenge for our visitors. Through this exciting and engaging new design by Ennead Architects, these issues have been resolved in a manner that will completely transform the visitor experience.&#8221

The initial phase of renovation features the expansive, two-story-high colonnaded space with its original coffered glass-block ceiling. For many years, this room served to display the Museum’s holdings of pre-Columbian, Native American, and Oceanic art. Now to be known as the Great Hall, it is a rare example in New York City of a hypostyle hall, with a dense grid of columns. Designed to form the core of a series of galleries, the space now features four monumental freestanding walls, which define a central gallery. The renovation has also created a new South Gallery, restoring to public use an area previously used for back-of-house functions.

&#8220The goal in this first phase of renovation has been to create a grand central gallery that gives focus to this tremendous space,&#8221 states Susan T. Rodriquez, a partner of Ennead Architects who led the design effort for the transformation. &#8220The entire project, when completed, will provide a more porous, transparent, and accessible experience. It reimagines the Great Hall as layers of galleries surrounding the central space and provides a dramatic visitor sequence that will showcase the Museum’s collections.&#8221

The new freestanding walls allow for the display of art while concealing climate-control systems within. Their crisp, diagonal edges facilitate and reinforce movement from the Lobby into the Great Hall. The central gallery features a new terrazzo floor. The entire gallery volume has been technically upgraded to become a state-of-the-art museum environment, complete with new sprinkler and lighting systems.

The lighting, designed by the Renfro Design Group, features a flexible track system integrated into the historic coffered ceiling, with LED lighting in the central bay. Natural light filters down to the Great Hall through McKim, Mead & White’s glass-block ceiling, which forms the floor of the Beaux-Arts Court. A new glass floor was introduced over the existing glass-block floor in the Court renovation by Ennead Architects in 2009. The Gilbane Building Company was the construction manager for that project.

The renovated space will be inaugurated on March 4 with a site-specific architectural installation, reOrder: An Architectural Environment by Situ Studio, which will engage the existing monumental columns with a series of suspended fabric canopies and furniture that relate to the details of the McKim, Mead & White structure. It will be on view through January 15, 2012, after which the space will become an introductory gallery to the entire permanent collection.

The first exhibition to be presented in the new South Gallery will be Thinking Big: Recent Design Acquisitions, also opening on March 4 and on view through May 29, 2011, after which it will be given over to a new installation of selections from the Museum’s holdings of African Art. Current plans for additional enhancements to the Hall and the first floor are anticipated to begin in the fall of 2011 and be completed in 2013.

The next phase of the first-floor transformation will include a Museum Cafe, a bar, and an outdoor dining terrace located directly off the lobby. The design will include the Williamsburg murals, on long-term loan from the New York City Housing Authority. The cafe will feature a formal dining room that can be used for special functions and a casual dining area overlooking the Steinberg Family Sculpture Garden. There will be direct access to the dining areas from adjacent parking.

The Museum Shop will be relocated to the area currently occupied by the Robert E. Blum Gallery near the main lobby. The new shop will be redesigned by Visbeen Associates, Inc., an award-winning architectural firm based in Grand Rapids, Michigan, whose projects include several of the Metropolitan Museum of Art satellite stores, as well as the Peabody Essex Museum shop. Important new features to enhance the visitor’s experience will be a wider entrance that will open onto the Grand Lobby, providing greater visual access to the galleries in the Great Hall and assisting with circulation patterns, as well as a new signage system.

The space that has been occupied for decades by the Museum Cafe, as well as offices and art-storage areas, will be reclaimed as a special exhibition gallery, which will replace the existing Robert E. Blum Gallery. The final phase of the first-floor transformation will include the renovation of gallery space currently occupied by the African galleries, which will be deinstalled on June 26, 2011, and will reopen in the South Gallery on August 12, 2011.

At the completion of the renovation of the first floor, all gallery space will be climate controlled, and non-exhibition spaces will be air-conditioned.

The Brooklyn Museum, as designed by McKim, Mead & White in the late nineteenth century, was built in many stages, and only one-sixth of the original design was completed. It has undergone several subsequent changes. In 1897 the West Wing (now known as the Morris A. and Meyer Schapiro Wing) was completed. Construction continued through the early twentieth century, and the large first-floor hall that housed the Museum’s non-European art collections opened in 1925, serving as the focal point of a series of galleries dedicated to various cultures of the world. Until the staircase in front of the Museum was removed in 1934, a large portion of the first floor contained an auditorium. Another major change took place in 1965, when four massive case structures were constructed and the space, showcasing North Central and South American collections, was renamed the Hall of the Americas (now to be called the Great Hall). The addition of the glass Rubin Pavilion on Eastern Parkway in 2004 reenergized visitor circulation on the first floor.

The current first-floor renovation continues a major redesign of the Museum’s ground level that began in 2004 with the opening of the Rubin Pavilion, the Ennead-designed, critically acclaimed front entrance, as well as the renovated lobby, redesigned front plaza, new South Entrance, and expanded parking facilities. It continues a Master Plan created in 1986 by the partnership of Polshek Partnership (now Ennead architects) and Arata Isozaki & Associates to improve and expand the Museum building, with a strong emphasis on making all gallery spaces climate controlled. Subsequently, they affected
a number of significant changes to the building, including the 1993 renovation of the entire Schapiro Wing, as well as the creation of the Iris and B. Gerald Cantor Auditorium and new art-storage facilities in the early 1990s. Ennead also designed the Elizabeth A. Sackler Center for Feminist Art, which opened in 2007. The recently completed Service Extension building for the reception and processing of art and the complete renovation of the entire basement for staff and support spaces were both designed by Ewing Cole.