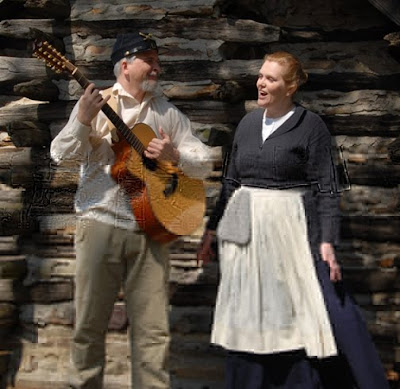 The Adirondack Museum&#8216-s Cabin Fever Sunday series will return to Saranac Lake, New York on February 27, 2011. &#8220Times of Trouble&#8221 with Weber and Hodges will be held at Saranac Village at Will Rogers. The time will be 2:00 p.m. The presentation will offered at no charge to museum members, residents of Saranac Village, and children of elementary school age or younger. The fee for non-members is $5.00.

Dressed in period costume, Weber and Hodges will weave narrative and song to share the little known life of Mary Brown. The poignant piece illustrates the significant role this plain woman played as wife of the radical abolitionist John Brown.

The program will present Mary’s early life and marriage as well as later tragedies involving bankruptcy, accidents, and death. The presentation closes with Mrs. Brown’s most difficult &#8220times of trouble&#8221 in the aftermath of the raid on Harper’s Ferry. Sandra Weber has spent ten years researching the life of Mary Day Brown.

Weber is an author, storyteller, and independent scholar with special interest in the Adirondacks, Mary and John Brown, as well as women’s history. Her publishing credits include eight books and numerous articles in periodicals such as Civil War Times, Adirondack Life, Pennsylvania Magazine, and Highlights for Children.

In 2004 and 2005, Sandra Weber toured with folksinger Peggy Lynn performing stories from their book, Breaking Trail: Remarkable Women of the Adirondacks.

David Hodges has played guitar and bass for more than twenty years. He has performed with bands throughout New York, Texas and Pennsylvania and recorded CDs with &#8220Mad Factory&#8221 and &#8220Evil Twin.&#8221 Hodges currently plays with &#8220Mr. Freeze,&#8221 a blues-rock band, and accompanies Sandra Weber in folk music performances.