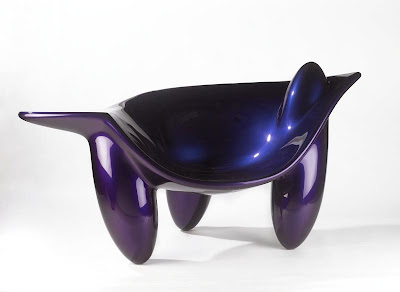 The Brooklyn Museum will present the special exhibition Thinking Big: Recent Design Acquisitions from March 4 through May 29, 2011. The installation of forty-five twentieth- and twenty-first-century objects from the Museum’s permanent collection of decorative arts that have been acquired since 2000 will include a number of large-scale objects that will be exhibited for the first time.

Several important themes that have guided these acquisitions will be highlighted, including Brooklyn-designed objects- young designers- unusual materials and innovative methods of production- designs for children- and mid-twentieth century modernism.

The Brooklyn Museum has been actively acquiring twentieth- and twenty-first-century objects since the 1970s. Among the works featured in the exhibition are &#8220Cinderella&#8221 Table by Jeroen Verhoeven, 2005- Chest of Drawers, Model #45, &#8220You Can’t Lay Down Your Memories&#8221 by Tejo Remy, for Droog, 1991- &#8220Nirvana&#8221 Armchair by Wendell Castle, 2007- Spacelander Bicycle by Benjamin Bowden, 1946- and Womb Chair by Eero Saarinen, 1947-48. Objects by Charles Eames, Cindy Sherman, Konstantin Grcic, Francois Jourdain, and Harry Allen will also be included.

Thinking Big will be the first exhibition in a gallery that has been reclaimed from nonpublic space. The gallery is part of a renovation that is the first phase in a program that will redesign and transform much of the Museum’s first floor beyond the Rubin Pavilion and Lobby, which opened in 2004.