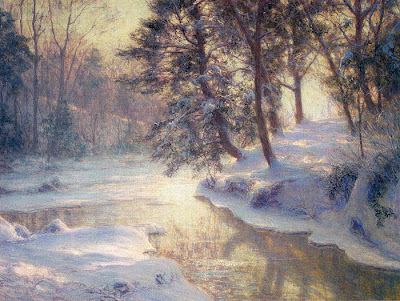 On Thursday, February 17, from noon to 2:00 pm, the public is invited to celebrate the work of one of Albany’s most prolific artists, Walter Launt Palmer, at “Snow Scenes,” a buffet lunch and lecture at the University Club, followed by a guided tour at the Albany Institute. Attendance at the fundraiser does not require membership in either organization.

Tammis Groft, the Albany Institute’s Deputy Director for Collections and Exhibitions, will discuss a collection of Palmer’s snow scenes on permanent exhibit in the dining room of the University Club (141 Washington Avenue at Dove Street, adjacent to the Institute), along with a selection of related material in the museum’s collection.

Participants will also get a close look at two recently acquired pieces of Chinese ceramics that Palmer depicted in his 1878 painting, Interior of the Learned House, 298 State Street, Albany. The ceramic pieces were donated in 2009 by Philip Kerr of Ann Arbor, Michigan. The painting itself will be on view at the Institute, along with a library table (designed by New York Architect Russell Sturgis), which is also featured in the painting. Frequently called “The Painter of the American Winter,” the Albany-born Walter Launt Palmer (1854–1932) produced more than 300 snow scenes from 1884 to 1932. In his 1910 essay, “On The Painting of Snow,” Palmer, who had embraced Impressionism, acknowledged his debt to John Ruskin and the Pre-Raphaelites for influencing his early work, especially the discovery that the shadows on snow are blue.