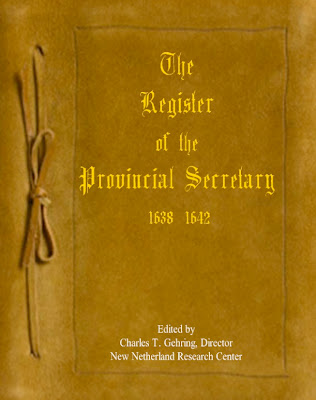 Out of print for many years and inaccessible to researchers, the first volume of the Register of the Provincial Secretary of New Netherland is now available on the web courtesy of the New Netherland Research Center. This archive, originally comprising 49 books, contained copies of correspondence, land conveyances, court proceedings, resolutions of council,regulations, contracts, leases,and more. The Provincial Secretary was responsible for recording the proceedings of the High Council and maintaining these archives for future reference.

In the 19th century, E. B. O’Callaghan decided that the Dutch records could be organized more logically. His “improvement” was to tear the books apart and rearrange the documents according to genre. The original 49 books became 23 volumes, each containing a specific type of document.

The first volume in his scheme,Register of the Provincial Secretary 1638-41, consists of wills, inventories of estates, depositions, and other documents. O’Callaghan produced translations of the three volumes of “Registers” and the first volume of “Council Minutes.”

Some years later another translator, A. J. F. van Laer, judged O’Callaghan’s work to be unreliable and undertook a new translation. By 1911 he had completed a translation of the first volume- this and the original records were lying on his desk when a disastrous fire broke out in the State Library. Van Laer’s work was destroyed, together with the Dutch originals.

Although all the Dutch records suffered varying degrees of damage, only this volume, volume one of the colonial Dutch records, was completely destroyed. All that remains of its Dutch original is a transcription of documents 95-143, which Van Laer happened to have at his house.

To continue his projected new translation, Van Laer had to use the surviving O’Callaghan translation. However, as the Dutch originals were still fresh in his mind, he was able to correct O’Callaghan’s translation in extensive footnotes. Van Laer eventually also translated the next three volumes (“Registers” for 1642-47 and 1648-57,and “Council Minutes” for 1638-49) as arranged by O’Callaghan.

These were not published until 1973, several years after his death in 1955. Minor changes only have been made to the text and to Van Laer’s notes, and corrections are incorporated according to Van Laer’s notations.

Offensive language or situations have been put back in the text, as have several pages that had inadvertently been left out. Future volumes in this series will consist of a scan of the original document, a transcription of the Dutch, and a translation with annotations. To browse or download volume one of the register, go to:
http://www.nnp.org/nnrc/Documents/vanLaer/index.html.