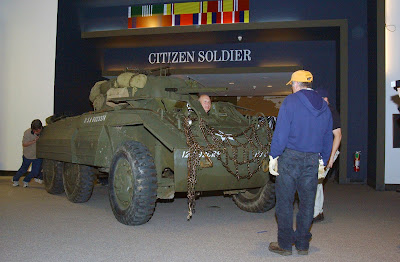 In honor of Veteran’s Day, the New York State Museum has installed two new cases in its Citizen Soldier exhibition, including personal items of the late Sgt. David Fisher, formerly of Watervliet, who was killed in Iraq in December 2004.

Vicki DiMura, the mother of Sgt. Fisher, has loaned the items to the Museum for display in the section of the exhibition documenting the role of Task Force Wolfhound in Iraq. The 21-year-old graduate of Watervliet High School was one of the Task Force Wolfhound soldiers and served with the 1st Battalion 101st Cavalry based at the Glenmore Road Armory in Troy. He was working as a humvee gunner during a patrol in Baghdad when his vehicle rolled over during a high-speed maneuver intended to avoid improvised explosive devices.

The items installed in the exhibition include a print of a portrait of Sgt. Fisher painted by artist Phil Taylor of the American Fallen Soldiers Project that provides, at no cost to family members, an original portrait of their loved one. Also on display are a memorial bracelet, a copy of Sgt. Fisher’s dog tags, a photo of him taken on the day he was killed, an unfinished lego tank, a stuffed Elmo doll given to Fisher by his unit on his 21st birthday, a frog ornament honoring Fisher’s nickname of “Squeak Frog” and a Teenage Mutant Ninja Turtle toy.

The other new addition to the exhibition is in the Spanish-American War section. It includes a cartridge belt with .45-70 cartridges worn by Sgt. James S. Martin of Brooklyn. This was loaned to the Museum by Martin’s grandson, Marty Pickands of Delmar. Martin enlisted in Company L, the 71st regiment. He and his regiment marched to San Juan Hill with the Rough Riders. Following the battle, Sgt. Martin was stricken with yellow fever and was so ill that he was mistaken for dead and placed alongside other American dead. A passing soldier noticed Martin “twitch” and promptly sought medical help for him. He later attended Yale Medical School and became a doctor.

Open in Exhibition Hall through March 2011, the exhibition can also be found on the Museum’s website. The exhibition focuses on the 20th century, which witnessed the transformation of the United States from an isolationist nation into a dominant power with the ability to shape world events. It was dubbed the American Century in 1941 by Time Magazine Publisher Henry Luce. During that time the National Guard evolved from an ill-equipped and poorly trained militia into a modern-day force capable of protecting American interests around the world.

Visitors entering the exhibition will see the M8 Greyhound Light Armored Car that was first introduced into combat in 1943. The 16,000-pound vehicle was used in all theaters of World War II, including Europe, where it was issued to the men of the 101st Cavalry Group of the New York National Guard. The car is now owned by Gregory Wolanin of Loudonville. Also on display are a flamethrower and bazooka, a 37 mm gun, as well as various other military equipment. Visitors will also have the opportunity to see the History Channel film, “Defending America,” which will be shown in the gallery.

There are many personal stories of courage and heroism throughout the exhibition. Medals of Honor were awarded to Col. William J. O’Brien and Sgt. Thomas A. Baker of Troy, both of the 105th Infantry Regiment, for their courage in the face of a horrifying enemy attack by the Japanese on Saipan in 1944. First Sgt. James Meltz of Cropseyville, a member of the 108th Infantry Regiment, received the Bronze Star for valor after rescuing fellow soldiers from a burning humvee in Afghanistan in 2008.