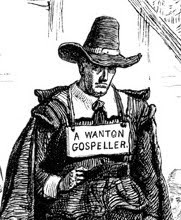 One of the more interesting early American sites on the internets, Anthony Vaver’s Early American Crime, is now available as a podcast. Beginning with “Early American Criminals: Thomas Mount and the Flash Company,” you can subscribe to hear (as well as read) tales of America’s earliest criminals.

Early American Crime features stories about the criminal underworld of colonial America and the early United States including criminal profiles, cultural essays, features on early crime slang, and an outstanding series of posts on convict transportation including it’s evolution as a new form of punishment, the business of transportation, convict voyages, and the end of the system.

Vaver described his site when it launched in 2008 by saying: &#8220Crime and its punishment are among the top social concerns in the United States today. Over one percent of the adult population in the United States now lives in prison, and even though the United States has less than 5 percent of the world’s population, it holds almost a quarter of the world’s prisoners. Stories of crime fill our newspapers and affect the elections of our public officials. Yet, we as Americans know little about the history of crime and punishment that has brought us to this point. My hope is that this website will help provide a more complete understanding of crime and punishment in America by focusing on its early appearance and practice.&#8221

The site is well worth taking a look at, and now also a listen to.