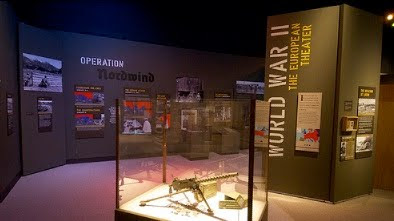 &#8220Citizen Soldier: New York’s National Guard in the American Century&#8221 chronicles a history that is based on a tradition dating back to colonial times in a state that has always been guided by the principle that its defense lies in the hands of its citizenry.

&#8220Citizen soldiers are everyday people who put their lives on hold to defend, aid and protect their communities and their country,&#8221 a museum press release says. &#8220From militiamen defending their homes on the colonial frontier, to individuals serving in conflicts around the globe, New Yorkers continue this legacy of service to the present day.&#8221

The exhibit is open in the museum’s exhibition hall through March 2011. Photos from the exhibit, as well as an interactive history timeline can now be found on the museum’s website at www.nysm.nysed.gov/citizensoldier.

The displays in the exhibition hall, and the online information, focuses on the 20th century, which witnessed the transformation of the United States from an isolationist nation into a dominant power with the ability to shape world events. It was dubbed the American Century in 1941 by Time Magazine Publisher Henry Luce.

During that time the National Guard evolved from an ill-equipped and poorly trained militia into a modern-day force capable of protecting American interests around the world. The 16,000 men and women who serve in the New York Army National Guard today fulfill a variety of critical missions both at home and abroad.

Visitors entering the exhibition will see the M8 Greyhound Light Armored Car that was first introduced into combat in 1943. The 16,000-pound vehicle was used in all theaters of World War II, including Europe, where it was issued to the men of the 101st Cavalry Group of the New York National Guard.

The car is now owned by Gregory Wolanin of Loudonville. Also on display are a flamethrower and bazooka, a 37 mm gun, and various other military equipment. Visitors will also have the opportunity to see the History Channel film, &#8220Defending America,&#8221 which will be shown in the gallery.

There are many personal stories of courage and heroism throughout the exhibition. One of those is that of Sgt. Henry Johnson of Albany, a member of the all-black 369th Infantry Regiment who single-handedly fought off a group of German soldiers before collapsing from 21 wounds during a battle in France in 1918. It wasn’t until 1996 that Johnson was awarded the Purple Heart Medal, and 2003 when the Army awarded him the Distinguished Service Cross, this nation’s second highest award for valor.

Medals of Honor, the nation’s highest military honor, were awarded to Col. William J. O’Brien and Sgt. Thomas A. Baker of Troy, both of the 105th Infantry Regiment, for their courage in the face of a horrifying enemy attack by the Japanese on Saipan in 1944. Also included is the story of Sgt. LeRoy Sprague of Elmira of the 108th Infantry Regiment who received a Purple Heart after being seriously wounded in 1945 during fighting on the island of Luzon in the Philippine Islands.

First Sgt. James Meltz of Cropseyville, a member of the 108th Infantry Regiment, received the Bronze Star for valor after rescuing fellow soldiers from a burning humvee during a Taliban ambush in Afghanistan in 2008.

Also included in the exhibition are a bronze bust and other items related to Maj. Gen. John Francis Ryan, who grew up in Morrisania, Westchester Co. and became the commander of the New York National Guard in 1912. He led the 27th Division on the Mexican border and to victory in World War I.

A section of the exhibition is devoted to women in the New York National Guard. Featured here are profiles of Spc. Amy Klemm of Ronkonkoma, who volunteered to serve in both Iraq and Afghanistan, and Capt. Tara Dawe of Queens, who volunteered for service in Bosnia and later passed up Officer Candidate School so that she could deploy with her unit, the 442nd MP Company, to Iraq.

The State Museum is a program of the New York State Education Department’s Office of Cultural Education. Located on Madison Avenue in Albany, the Museum is open daily from 9:30 a.m. to 5 p.m. except on Thanksgiving, Christmas and New Year’s Day. Admission is free. Further information about programs and events can be obtained by calling (518) 474-5877 or visiting www.nysm.nysed.gov.