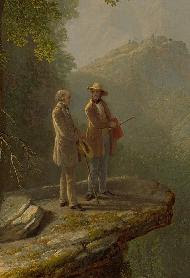 As one who hobnobbed in elite cultural circles but also worked with his hands and roughed it in the woods and mountains, was the antebellum American landscape painter to be a gentleman or an undomesticated wild man, a James Fenimore Cooper or a Davy Crockett? Join Dr. Sarah Burns, Ruth N. Halls Professor of Fine Arts at Indiana University, as she examines the ways in which Hudson River School painters attempted to reckon with the problematic aura of femininity that clung to the image of the artist at that time. The lecture, &#8220Outdoor Men: Manliness, Masculinity, and the Antebellum Landscape Painter,&#8221 will be held on Sunday October 10 is at 2pm at the Thomas Cole National Historic Site in Catskill. Admission is $7 per person, or $5 for members, and is first-come-first-served.