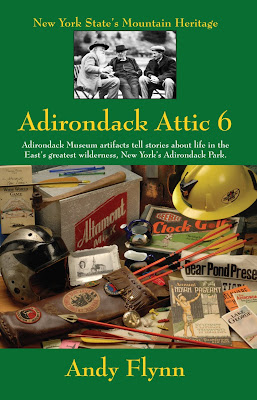 Author Andy Flynn, of Saranac Lake, tells 53 more stories about the museum’s collection in New York State’s Mountain Heritage: Adirondack Attic, Volume 6, bringing the story count to more than 300 for the six-volume series that began in 2004. Stories, and artifacts, come from all over the Adirondack region.

“Each story is special unto itself- however, taken as a whole, this series gives us the big picture,” Flynn told the Almanack. “Thanks to these artifacts, we now have a unique perspective on the Adirondack experiment and a better understanding of the 6-million-acre Adirondack Park, its people and communities, and how life has changed here over the past 300 years.”

Flynn created the Adirondack Attic History Project to “promote the heritage of the Adirondack Park to residents and visitors through publications and programs.” As the owner/operator of Hungry Bear Publishing, he works with curators at the Adirondack Museum and other historical associations and museums in the region to tell human-interest stories about their artifact collections.

In April 2010, North Country Public Radio began running Flynn’s new Adirondack Attic Radio Series, sponsored by the Adirondack Museum and singer/songwriter Dan Berggren. It airs the first Tuesday of the month during the Eight O’Clock Hour with Todd Moe. For each program, Flynn features a different artifact from the collection of a museum in the Adirondack North Country Region. He uses the Adirondack Museum as his “History Headquarters” but also visits other museums to track down the objects people have made, used and left behind.

Flynn also publishes the Meet the Town community guide series with booklets for Saranac Lake, Lake Placid/Wilmington, Canton, Potsdam, Tupper Lake/Long Lake/Newcomb and the Au Sable Valley. From 2001 to 2009, he was employed as the Senior Public Information Specialist at the Adirondack Park Agency Visitor Interpretive Center in Paul Smiths.

Flynn is an award-winning journalist, garnering merits of excellence from the National Newspaper Association, New York Newspaper Publishers Association and the New York Press Association. While the staff writer at the Lake Placid News, he was named the 1996 NYPA Writer of the Year for weekly New York state newspapers with circulations under 10,000. Before joining the VIC staff, he was a writer and editor for the Adirondack Daily Enterprise in Saranac Lake and the Lake Placid News, a correspondent for the Plattsburgh Press-Republican, an announcer for WNBZ 1240-AM in Saranac Lake, and a general assignment news reporter and radio documentary producer for North Country Public Radio in Canton. He is a graduate of the SUNY College at Fredonia (1991) and the Tupper Lake High School (1987).

For more information about the Adirondack Attic book series and radio program, call (518) 891-5559 or visit online at www.hungrybearpublishing.com.

24: Bug dope in the Adirondack woods