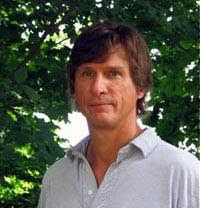 The Adirondack Center for Writing presents author and historian Colin Wells in their annual Reading Series. The series hosts writers and poets from the North Country at local venues to share their recent work. Wells’ talk is titled “Potty Humor and History: The Strange Friendship of Nicolo Machiavelli and Francesco Guicciardini” and will explore Nicolo Machiavelli’s friendship with the “first modern historian.” He will speak on September 16th at 7pm at The Whallonsburg Grange Hall in Whallonsburg, NY. The event is FREE and open to the public.

Colin Wells has been interested in history since his undergraduate days at UCLA, and has published widely, from Sailing from Byzantium: How a Lost Empire Changed the World, to The Complete Idiot’s Guide to Understanding Saudi Arabia. Reviewing Sailing from Byzantium, the American Library Association’s Booklist said, “Wells brings vividly to life this history of a long-lost era and its opulent heritage.” His most recent book is called A Brief History of History: Great Historians and the Epic Quest to Explain the Past. The book brings together evocative sketches of the great historians with concise summaries of their most important works. Wells demonstrates how brilliant minds have changed our understanding of history, how history itself moved forward over time as a way of approaching the past, and why &#8220history&#8221 is a startlingly fluid concept, with an evolutionary course&#8211a story&#8211all its own.

In addition to works of popular history, Wells has published a children’s mystery titled Stick Like Glue and is working on a new book called The Invention of God: The Origins of Faith in the Rise of Reason. He lives with his two Samoyeds and a crew of cats in Westport, where he writes for the local paper.

The Adirondack Center for Writing is an independent non-profit, 501(c)3 organization dedicated to promoting literature and providing educational opportunities and support to both aspiring and established writers in the Adirondack region. We provide workshops, conferences, and readings throughout the year in locations all around the Adirondack Park. ACW is based at Paul Smith’s College and is supported by a strong membership and public funds from the New York State Council on the Arts, a state agency.