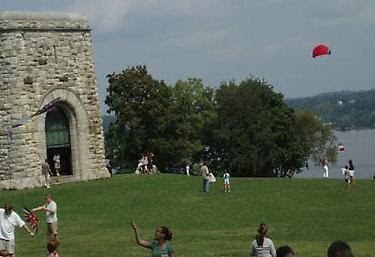 If you feel like flying a kite, or watching one in flight, come to Washington’s Headquarters State Historic Site, Saturday, August 28th from 2:00 until 4:00 PM for the free annual “Kites Over The Hudson.”

For the first 150 children, ages 15 and under, there are free kites and prizes in various categories. If you are over 15, enjoy the scenery and breezes blowing off the Hudson River. For all, there are free refreshments.

Admission to Washington’ Headquarters, the first historic site in the nation, will be underwritten by the Central Hudson Gas and Electric Company. The kites, refreshments, prizes and entertainment for the day all are being provided through the gracious patronage of the Friends of the State Historic Sites of the Hudson Highlands.

Guided tours, conducted by costumed historic interpreters, will address not only the history of the house and the role it played during the Revolutionary War, but also touch upon its importance in light of historic preservation. From its inception as a designated state historic site, it set the example for over 7,000 similar locations to follow.