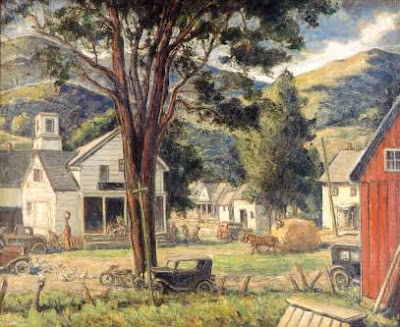 The music of the era in which Vermont’s native son, Calvin Coolidge, served as president will be featured at a free recital at his birthplace. Pianist Abigail Charbeneau and soprano Jane Berlin Pauley will perform at the President Calvin Coolidge State Historic Site on Sunday, August 8 at 3:00 p.m.

Their 45-minute program, “Tunes of the 1920s & 1930s,” will feature music by American composers George Gershwin and Cole Porter, as well as Russian composer and pianist Sergei Rachmaninoff. An afternoon tea follows at the site’s restaurant, the Wilder House.

“Rachmaninoff was an honored guest at the Coolidge White House, performing there on at least three occasions,” said William Jenney, Regional Historic Site Administrator for the Vermont Division for Historic Preservation.

“In fact, the Coolidge Site’s collection includes the menu for the tea prepared for Rachmaninoff on March 30, 1927,” Jenney said. “He and 156 invited guests were treated to an assortment of sandwiches and desserts for the sum of $151.13.”

This is the first concert of the 2010 Grace Coolidge Musicales, a series named in honor of one of America’s favorite First Ladies. The program includes patriotic melodies honoring the country that Coolidge served.

Jenney said the audience will also have the rare opportunity to hear a soprano sing Rachmaninoff’s “Vocalise,” a piece typically heard as a string solo with piano accompaniment.

Charbeneau and Jane Berlin Pauley currently teach at the Concord (NH) Community Music School. Abigail Charbeneau is a native of Woodstock, Vermont and has a master of music in piano performance and piano pedagogy from the University of Illinois.

A regular performer with the Musicians of Wall Street in Concord, Abigail has performed on the Walker Lecture Series and has played at two Inaugural Balls for New Hampshire Governor John Lynch. In addition to her teaching duties, she is the music director at the Unitarian Universalist Church in Concord.

Jane Berlin-Pauley received her master’s degree from the New England Conservatory of Music. She pursued further studies at Westminster Choir College, Manhattan School of Music, and the Tanglewood Music Center.

The concert will be first official performance in the President Calvin Coolidge Museum & Education Center, which will be dedicated during Plymouth Old Home Day festivities on August 7.

It will showcase the famous “Grace Coolidge piano,” given to Mrs. Coolidge by the Baldwin Company and used in the family quarters at the White House.

The Grace Coolidge Musicales continue on September 12 and October 3 and are organized by the Vermont Division for Historic Preservation and generously sponsored by the Alma Gibbs Donchian Foundation.

The concerts are free and open to the public- donations are welcome. Reservations are recommended.

For further information or to make reservations call (802) 672-3773, or visit www.HistoricVermont.org/Coolidge