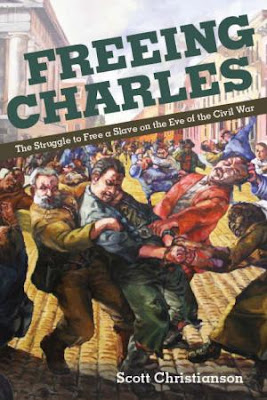 On April 27, 1860, a few months after John Brown’s raid on Harper’s Ferry, a group of blacks and whites, including Harriet Tubman, came together to free fugitive slave Charles Nalle from slave catchers bent on returning him to his owner in Culpepper, Virginia. A new book Freeing Charles: The Struggle to Free a Slave on the Eve of the Civil War by Scott Christianson tells the tale of Nalle, a man whose skin was so fair he could have passed for white but didn’t, and relates the of racial inequality, rule of law, civil disobedience and and violent resistance to slavery that circulated in the abolitionist movement during the antebellum period in Troy.

Christianson follows Nalle from his enslavement by the Hansborough family through his escape via the Underground Railroad after fearing that his heavily indebted master planned to sell him. Nalle’s wife and children, emancipated on their master’s death, had already moved to nearby Washington, DC and Nalle had hoped to be reunited with them in Canada.

The Nalle rescue was one of the fiercest anti-slavery riots to take place after Harper’s Ferry and it tested the convictions of the black and white citizens of Troy in challenging the Fugitive Slave Law.

The incident that forms the basis of the book began when Charles Nalle was betrayed to his southern master by Horace Averill (for whom my home village of Averill Park was later named) while trying to seek Averill’s help to write letters in an effort to free his family.

Nalle then moved to Troy and found work with Uri Gilbert, of the Gilbert Car manufacturing Company in West Troy, and began living with the family of William Henry, a black grocer, and also a member of local Vigilance Committee.

Nalle was arrested at a Troy bakery and taken to the District Circuit Court at State and First Streets. Hundreds of people rushed to the court house and Nalle’s jailers took him to a judge’s office in Albany County, with the crowd in hot pursuit.

The crowd stormed the office, and were fired on by police who wounded several people, but Nalle was put in a wagon and escaped to Schenectady County, spending a month on the run. Only Lincoln’s election and the rise of local Republicans kept members of the Vigilance Committee from being convicted.

Local people raised $650 to buy Nalle’s freedom from his master, a man who was also his younger half-brother, and he and his family were reunited three months after his escape. They lived in Troy for another seven years. After the war, the Nalles moved to Washington DC to be closer to relatives and Charles Nalle died there in 1875. He was buried in Rock Creek Cemetery.