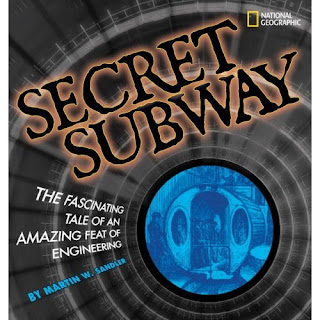 A nice children’s book (for older kids) on a little known two-block long subway that remains buried like a time capsule under the streets of New York City recently arrived on my desk. Published by National Geographic Children’s Books, Martin W. Sandler’s Secret Subway: The Fascinating Tale of an Amazing Feat of Engineering, takes on the incredible story of the visionary engineer who built New York City’s first subway only to have his dreams crushed by the greed and political power of Boss Tweed and Tammany Hall.

The story came to light in 1912, when workers digging a new subway line unearthed a intact time capsule of New York City’s underground past &#8211 and fully preserved subway station built in the 1860&#8242-s. The builder was Alfred Beach, the editor of Scientific American, who was appalled by the city’s traffic situation (even then!) and set out to build an innovative air-powered underground train powered by a fifty-ton fan dubbed &#8220The Western Tornado&#8221. The New York Time’s called the project &#8220the most novel, If not the most successful, enterprise that New York has seen for many a day.&#8221

Sandler, the author of more than 50 books, winner of seven Emmys, and who has been twice nominated for a Pulitzer, is a remarkable story-teller who is not afraid to give younger readers a full account of the financial, political and personal wheeling and dealings of Beach, the Panic of 1873, the development of New York City’s subways, and even the demise and death of Boss Tweed. Here’s a little sample:

&#8220In 1912 workmen, digging an extension of the Broadway line, suddenly hit upon a solidly built steel and brick wall. Breaking through the wall, they found themselves inside Alfred Beach’s pneumatic tunnel. What was even more amazing was the incredible condition the tunnel and Beach’s elegant waiting station were still in. Beach’s subway car still sat on the tracks, although most of the parts made of wood had rotted away. The magnificent waiting room fountain still stood tall. Father down the tunnel, the workmen found the hydraulic shield with which Beach had revolutionized the art of digging tunnels.&#8221

Since it was before historic preservation was an important cultural phenomenon, the station, the car, and the other remnants were all simply buried &#8211 where they remain to this day. Sandler’s Secret Subway keeps it alive for young readers, along with the issues surrounding politics, economics, and technology in second half of the 19th century.