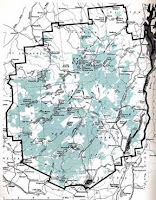 Over at my other web project Adirondack Almanack we’re putting together an interesting list of the most influential people in Adirondack history. The list is somewhat of an exercise in &#8216-big man history’ but it grew from discussions at the Almanack over the two great traditions of modern Adirondack thought: those who support the forest preserve, the park, and the Adirondack Park Agency, and those who generally oppose those institutions.

Head over there &#8211 I’ve included a brainstormed list of people from the environmental, cultural, and political history of the park, but I’d like to hear your opinions and suggestions.