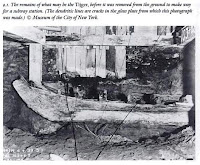 In 1916 the burnt timbers of what some believe is a 17th-century ship’s keel (the remains of Adriaen Block’s Tiger, forerunner of the Onrust) were discovered at the site of the future World Trade Center. You can read about that at one of my favorite blogs, The Old Salt Blog. Later, an ancient anchor and a Dutch cannon were recovered there in 1967. These maritime relics will be exhibited together in February 2-28, 2010, along with a model of a new ship that commemorates the World Trade Center and honors America’s maritime heritage.

The exhibit will be kicked off with an Exhibition Preview, Luncheon and Fundraiser on February 3, 2010. The preview event will feature preservationists Peter Stanford and Kent Barwick, an exhibition preview, the dedication of World Trade Center Steel, cocktails and a luncheon, followed by a guided tour of the exhibition.

* the charred remains of a ship’s bow excavated in 1916, long thought to be the ship’s keel of Dutch explorer Adrian Block’s Ship TIJGER, which burned off Manhattan in 1613, and a bronze cannon marked &#8220VOC,&#8221 property of the Dutch East India Company (Courtesy Museum of the City of New York)-

* an ancient, 11-foot iron anchor hoisted from the construction site of the World Trade Center in 1967, where it had been buried for more than 300 years (Courtesy National Maritime Historical Society)-

The exhibit, curated by Margaret Stocker, is being hosted by India House (One Hanover Square, NYC) and is being presented by the India House Foundation.

One thought on “Ships, Explorers, And The World Trade Center”