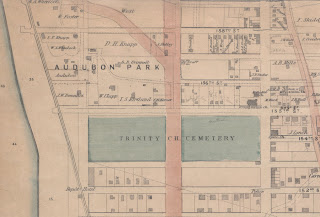 The apartment houses, which range in height from 5 to 13 stories, were constructed in the tradition of the elegant residential buildings to the south in Morningside
Heights and on the Upper West Side following the extension of the IRT Broadway-Seventh Avenue subway line to the neighborhood in 1904.

Most of the buildings were given names that recalled the neighborhood’s past, and evoked glamour and prestige, such as the Grinnell, a massive Mission Revival style apartment house at 800 Riverside Drive that was named for the family who once owned most of Audubon’s estate following his death- Hispania Hall at 601 W. 156th St., a reference to the nearby Hispanic Society of America- and the Riviera at 790 Riverside Drive, both of which are designed in the Renaissance Revival style.

“These buildings are not only highly intact, but also retain the vibrant details and character that attracted residents to them a century ago,” said Chairman Tierney. “The curving streets and dramatic vistas formed by the area’s hilly topography continue to define the neighborhood to this day, and create a powerful sense of place.”