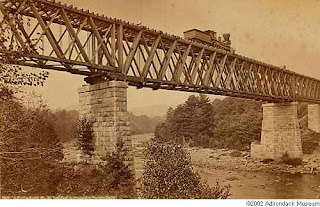 His career spanned the settling of the Adirondacks, the heyday of the guide, the steamship, and the grand hotel. Pioneer photographer Seneca Ray Stoddard produced over 8,000 images of a changing landscape &#8212- the largest documentary record of regional life in the late nineteenth century. Adirondack photographer Mark Bowie followed in Stoddard’s footsteps more than a century later, faithfully photographing once again the exact locations of many of his classic images.

Join Bowie on Sunday, February 15, 2009 at the Adirondack Museum at Blue Mountain Lake, New York as he compares the Adirondacks of today with Stoddard’s. The comparisons are fascinating, sometimes surprising, in every case, illuminating.

Mark Bowie is a third generation Adirondack photographer. He is a frequent contributor to Adirondack Life and Adirondack Explorer magazines. His photos have been published in Natural History, as well as by the Sierra Club, Conde Nast Publications, Portal Publications, and Tehabi Books.

Bowie’s first book, Adirondack Waters: Spirit of the Mountains (2006) is a landmark regional publication. In Stoddard’s Footsteps: The Adirondacks Then & Now was recently published. He has recently completed work on a third book, The Adirondacks: In Celebration of the Seasons, to be released in the Spring 2009.

Mark Bowie leads digital and landscape photography workshops, has produced several multi-format shows about the Adirondacks and has been featured on the Public Television programs &#8220Adirondack Outdoors&#8221 and &#8220Insight.&#8221 He lives with his wife, Rushelle, in Pittsfield, Massachusetts.

The program, &#8220In Stoddard’s Footsteps&#8221 will be the second in the museum’s popular Cabin Fever Sunday series. Held in the Auditorium, the presentation will begin promptly at 1:30 p.m. Cabin Fever Sunday programs are offered at no charge to museum members. The fee for non-members is $5.00. There is no charge for children of elementary school age or younger. Refreshments will be served. For additional information, please call the Education Department at (518) 352-7311, ext. 128 or visit the museum’s web site at www.adirondackmuseum.org.