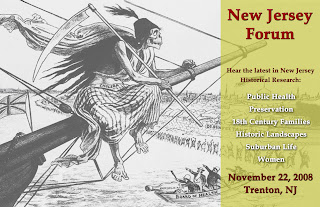 Although this is a blog of New York History, occasionally we’ll make announcements about regional events that New York historians might have interest in.

Registration information and a preliminary program of events is available via word document here.

Newsprint, Fear, and the Cholera: A History of the 1832 Cholera Outbreaks in New Jersey (Margaret Charleroy, University of Minnesota )

&#8220He Will be a Bourgeois American and Spend his Fortune in Making Gardens”: A Preliminary Examination of Joseph Bonaparte’s Point Breeze Estate, Bordentown, New Jersey (Richard Veit, Department of History and Anthropology, Monmouth University)

“Working for the Slave as a Mother would Work for her Children”: Abigail Goodwin and the Anti-slavery Movement in New Jersey (Bruce Scherer, Project Archivist/Librarian, Salem County Historical Society, Salem, NJ)

Black and White Together? Slavery and Freedom in Upper Freehold Township from the Colonial Period to the Early Republic (Sue Kozel, Independent scholar)