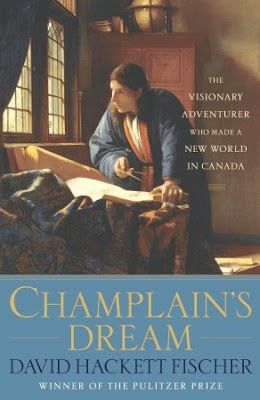 David Hackett Fischer&#8216-s new biography of Samuel de Champlain is out. He will be at the New York State Writers Institute on Thursday to discuss the work, and there’s a review in the Albany Times Union by Paul Grondahl:

Published this month to capitalize on planned 2009 quadricentennial celebrations of Hudson and Champlain, the Pulitzer Prize-winning historian has written a comprehensive, magisterial biography, Champlain’s Dream

. It is intended to resurrect the extraordinary accomplishments of a protean figure largely overlooked in today’s history courses&#8230-

That dream of creating a French colony in North America began circa 1570 on the Atlantic coast of France, where Champlain grew up tolerant of religious differences in an era of brutal sectarian warfare. It is unclear whether Champlain was baptized Catholic or Protestant and much of his lineage remains murky. Fischer does not entirely discount historians who have suggested that he was an illegitimate son of the illustrious French king Henri IV — who gave financial support to Champlain’s explorations, granted him special access and provided a pension for him.

Regardless of his paternity, Champlain went to sea as a youth and acquired exceptional sailing and navigation skills. In his jam-packed career, he was a soldier, spy, explorer, cartographer, author, artist and, above all, a conciliator among warring Indian tribes in the New World.

Unlike other agents of imperialism, Champlain did not go in search of gold or conquest, but rather to spread the culture of France, to discover new places and to bring together diverse people in a spirit of harmony.

His travels are prodigious. He made at least 27 Atlantic crossings between 1599 and 1635 without losing a ship- traversed six Canadian provinces and five American states by land and water- created maps more detailed and accurate than his contemporaries- wrote in-depth accounts of his trips that fill six large volumes. Oddly, he never learned to swim.

It is as the father of New France that Champlain deserves the most recognition, according to Fischer. As the founder and leader of the first permanent French settlements in North America, he went so far as to subsidize new families with his own money.

Although Champlain had some stains on his character, including shabby treatment of his French servants and an inability to absorb criticism, by the time of his death in 1635 he had succeeded in permanently planting French culture in the New World.