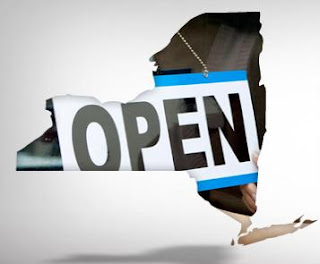 This is No Place to Dream Small

No matter who you are or what you dream of becoming, remember this:

No one ever came here to take a back seat,

Or make it small.

This is New York State.

This proud assertion of New York’s leadership, a place for opportunity and growth, reminds us of the importance of our history. New York has always been a great place. During most of that history, New York has been the business, banking, and manufacturing leader of the nation. It has always been a place where “big happens.” More history of particular businesses and a book on the economic history of New York State would be helpful in highlighting the point.*Economic development&#8230-and history? In December, Governor Andrew Cuomo announced awards totalling $738 million through Round Two of his Regional Economic Development Council initiative. The goal is to jump-start the economy and create jobs. In Round One, last year, there were several grants for a number of history-related projects. This year, a number have history-related connections. A few examples, from the governor’s announcement:

This state regional economic development initiative has considerable potential for the future. But to capitalize on it, historical programs need to consult with each other on a regional basis- tie historic preservation, e.g., adaptive reuse of historic buildings and sites, to economic development- and promote “heritage tourism.” It shows again the need for a publication or web site on “The Business Case for New York State and Local History.”*Digital government&#8230-and history? The New York State Committee on Open Government’s 2012 Report to the Governor and the Legislature recommends more “open data” and “proactive use of technologies to make the vast amounts of valuable government-held information more widely available, and to facilitate its ready use by policy makers and the public alike.” Since 1974, users of the Freedom of Information Law (“FOIL”) have been able to submit written requests to “pull” records out of government agencies. The Committee’s proposal reverses that, in a sense:The concept of proactive disclosure upends the current FOIL model by facilitating the release of relevant information through agency websites and other techniques, without the need for any specific request. Several state and local government agencies in New York now routinely post records online, and this trend should be embraced and encouraged. Fully embracing E-Government holds the potential to improve government efficiency and effectiveness, to educate and empower citizens, and to unleash public and private sector creativity and innovation.

The report focuses on open government and getting current and recent information out to the public. It does not discuss the potential benefit for history. But the idea of making more electronic information available on the web has implications for archivists working to preserve digital records and for historians and other researchers who might make use of the information. It will require policies and technical capabilities to maintain the information indefinitely to make it accessible to future users.

*Disaster preparedness…and history? In November, in the wake of Superstorm Sandy, Governor Cuomo established three commissions to help the state plan and prepare for future disasters. This suggests two questions from a history standpoint.

One, how have state and local governments reacted to past natural disasters such as the Blizzard of 1888, the Long Island hurricane of 1938, and Hurricane Agnes, which devastated the Southern Tier in 1972?

Two, how should the governor’s new “NYS 2100 Commission,” charged with “finding ways to improve the resilience and strength of the state’s infrastructure in the face of natural disasters and other emergencies,” factor in the need to protect historic structures, museums, historical societies, and other repositories of history source material?

One thought on “Bruce Dearstyne: Connecting History And Public Policy”