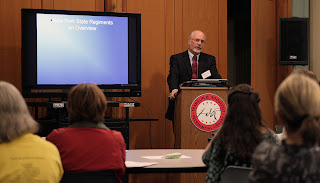 Many of us are familiar with the state law that requires municipalities to appoint historians, and as Gerry Smith has pointed out, NYS County Law, section 400, also requires counties to make similar appointments. Many counties and many municipalities comply with these laws. Many don’t. But that’s not what’s at stake here.

There is no state law that requires any county or municipality to fund historian positions, and Schenectady County officials were acting within their rights when they eliminated their historian’s budget. According to what I’ve read, county officials are planning to fill the position in some capacity. I can only say that I encourage Schenectady County to take state law seriously.

This is not the first time in which a county has eliminated funding for its historian, and I suspect it won’t be the last. Counties and municipalities are facing difficult times these days, and they are cutting budgets that fund teachers, police officers, firemen, and many other positions besides historians.

My own sense is that some county and local officials probably don’t appreciate the contributions historians make to the civic, cultural, and economic life of our communities as much as we would like. This is clearly something we’d like to change. But we’re not going to do it by making demands that we can’t enforce or expecting others to solve our problems for us. Instead we should be taking responsibility, staying patient and understanding, focusing our thinking, coordinating our efforts, working with everyone, listening to what they have to say, building on our accomplishments, and taking advantage of opportunities that are everywhere.

Hey, people like history. Some love it. They read books, go to history-themed movies, visit museums and historic sites, preserve buildings, research their family genealogies, participate in re-enactments, support local historical societies, and hold never-ending debates about historical subjects that matter to them. History is fun, yes, and even entertaining.

But it’s more than that. A good history program educates people and makes them better citizens. It builds an appreciation for our sense of place and raises the quality of life for everyone. And it helps promote economic growth. People form their individual identities as New Yorkers based on the history they share, and whether they know it or not, they all understand the future based on their understanding of the past. This includes public officials who, as managers, make better decisions when they understand the administrative histories of their own governments. History is important. And it’s powerful.

Okay, so let’s work together a little harder to spread the word. We have outstanding leadership in the Association for Public Historians of New York State (thank you Gerry Smith) and the Government Appointed Historians of Western New York (Susan Conklin and Aimee Alden), and I agree with Wayne County Historian Peter Evans that we should be discussing tough issues whenever we meet. But we also need to do more than talk among ourselves. Every one of us has a responsibility to do good work and let our constituents and our decision makers know about it.

What we should never do is give into the cynical notion that nothing ever changes. Historians, of all people, should know better. Change happens all the time—sometimes for the better, sometimes for the worse—and generally because someone makes it happen.

Nor should we ever get discouraged. The news from Schenectady County may not be good, let’s not lose sight of the fact that, in the last month, Suffolk County appointed retired State Supreme Court Justice Peter F. Cohalan to a county historian position that had been vacant since 2007, and Dutchess County filled its four-year vacancy by naming William P. Tatum to the position.

There are great things happening everywhere I go in the state, and it’s clear to me that people—even public officials—really do love and appreciate history. Just this weekend, for example, I heard the County Supervisors for Saratoga Springs, Joanne Yepsen and Matt Veitch, speak eloquently about the importance of local history in their community and in their own daily work. The State Board of Regents, meanwhile, has made a strong and growing commitment to bringing history to people across the state. This includes the Education Department’s recent traveling exhibition, “The First Step to Freedom: Abraham Lincoln’s Preliminary Emancipation Proclamation.” New Yorkers from Long Island to Plattsburgh to Buffalo came to see and appreciate firsthand one of America’s most iconic documents. And in Syracuse, they stood in line for up to three hours. The Governor, too, takes New York’s history very seriously and speaks about it often. His “Path through History initiative,” in particular, presents us with a whole host of new opportunities for showing what we can do.

No doubt there are also possibilities taking shape that haven’t seen the light of day yet. As John Lennon once famously sang, “we’re all doing what we can.”