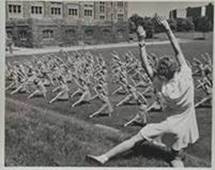 The most widespread, destructive, and consequential conflict in history will be the subject of WWII &amp- NYC, a major new exhibition now on view at the New-York Historical Society through May 27, 2013. Restoring to memory New York’s crucial and multifaceted role in winning the war, the exhibition commemorates the 900,000 New Yorkers who served in the military and also explores the ways in which those who remained on the home front contributed to the national war effort.

WWII &amp- NYC examines a metropolis massively mobilized for war, requiring unprecedented cooperation among government, business leaders, and average working citizens and affecting vast areas of the urban landscape. The exhibition will reveal a community that made great sacrifices and faced daunting challenges, but that also gained surprising opportunities.

Installed throughout all floors of New-York Historical, the sprawling exhibition features more than 300 objects, including artifacts, paintings, maps, models, photographs, posters, and other graphic materials, film footage, music, radio broadcasts, and newly recorded eyewitness accounts. Through these materials, visitors to WWII &amp- NYC can experience themes ranging from the mobilization of workers to the struggles over civil rights, from the frenzy of rapid shipbuilding to the celebration of V-J Day in Times Square.

“If the American men and women who fought and won World War II can be described as the Greatest Generation, then New York’s unsurpassed contributions to the war effort can be said to have earned it the title ‘Greatest City,’” stated Louise Mirrer, President and CEO of New-York Historical. “What award-winning WWII &amp- NYC curator Marci Reaven will show in this fascinating, and often astonishing exhibition, is how central the city was to a war whose battles were fought thousands of miles away—a story little known by most people today.”

The exhibition team for WWII &amp- NYC also includes Kenneth T. Jackson, former President of the New-York Historical Society, who is chief historian for the project. The exhibition will draw upon New-York Historical’s extensive collections and on important loans from the U.S. Navy, Smithsonian Institution, the Mariners’ Museum, and the Metropolitan Museum of Art, among other institutions.

Plan of the Exhibition
WWII &amp- NYC begins in the years before Pearl Harbor, when New York had already become the most important industrial metropolis on earth, the busiest port anywhere, a leading force in the financial world, and the largest, richest city on the planet. As a result, New York was also at the center of both isolationist and interventionist sentiment as Americans debated whether to enter the war.

Among the materials in the exhibition bringing these debates to life are a 1941 “Wanted” poster produced by Fight for Freedom, Inc., an interventionist group, depicting Adolf Hitler as a criminal, and an October 1941 editorial cartoon in the leftist New York newspaper PM by Theodore Seuss Geisel—better known as Dr. Seuss—criticizing the isolationists.

Following the passage of the Lend-Lease bill in 1941, which enabled the United States to supply the Allies, New York became one of the chief ports for war materiel shipments to Europe. A photograph from September 9, 1941 shows more than 100 British, Dutch, and Norwegian merchant ships passing through the Narrows to start their voyages across the Atlantic. When the December 7, 1941 attack on Pearl Harbor at last propelled the U.S. into the war, New York City’s maritime, industrial and transportation infrastructures would be entirely mobilized. The urban landscape took on a martial air, as defenses in the harbor were strengthened, old forts were updated and docks became high security zones. A painting by Thomas Hart Benton, Embarkation—Prelude to Death (Year of Peril, 1941-1942), was based on sketches the artist made in Brooklyn in August 1942, as the first American troops prepared to depart for Africa.

The presence of troops, refugees, and the wartime industries gave New York’s creative and commercial bustle a military tone. A photograph of Pennsylvania Station in August 1942 shows the concourse crowded with soldiers arriving from points across the United States, on their way to embark for North Africa and Europe. Also on view is Irving Boyer’s painting Prospect Park (ca. 1942-1944), which captures the raucous, sensual mood of the wartime city through a scene of soldiers and sailors enjoying a night on the town, which the artist glimpsed from a subway train at the Prospect Park BMT station.

The publishing and advertising industries instilled a sense of national purpose among Americans during wartime, convincing them to stay the course. Target No. 1 New York City, a 1942 poster designed by the influential graphic artist E. McKnight Kauffer, evokes the atmosphere of fear and urgency in the city after the attack on Pearl Harbor. Macy’s suspended its Thanksgiving Day Parade in 1942, consigning the balloon materials to a salvage yard to be used in the war effort, and a Macy’s advertising poster expresses confidence that the balloons will return in the future. A 1943 advertisement for Maidenform bras, created in reaction to threatened government restrictions on fabric and metal supplies, emphasizes that women workers are essential to the war effort and that brassieres are “a vital necessity to women at work.”

As husbands, sons, fathers, and brothers left their homes to serve, their wives, mothers, and sisters mobilized for the war effort on the home front. Among other materials illustrating this theme, the exhibition will include recruiting posters, a dress uniform, and photographs of the Women Accepted for Volunteer Emergency Service (WAVES), established in June 1942 as the female branch of the U.S. Naval Reserve, its members serving on shore duty to free men for duty at sea. The WAVES’s training headquarters was at Hunter College in the Bronx (now Lehman College), where more than 80,000 WAVES were trained from 1943 to 1945.

Jobs stemming from the wartime economy helped many New Yorkers escape from poverty, offered new opportunities for minority groups, and inspired movements for fair employment and civil rights. An exhibition highlight is Jacob Lawrence’s painting No. 2, Main Control Panel, Nerve Center of a Ship (1944), one of a series of paintings inspired by his service on the USS Sea Cloud as part of the first racially integrated Coast Guard unit in the U.S. armed forces. The exhibition also will feature a dozen profiles of individuals from various backgrounds in the Armed Forces, representing the nearly 900,000 New Yorkers who served in World War II.

The exhibition extends throughout the museum and explore other themes important to WWII and the city of New York. A complementary exhibit entitled The War for Civil Rights will highlight three major instances of the “Double V” campaign, in which African-American leaders sought to win victory over the Nazis and end racism at home: the Negro Freedom Rallies at Madison Square Garden, the fight to end Red Cross blood segregation, and the movement to overturn discriminatory housing development tenant policies in Stuyvesant Town.

The Judith and Howard Berkowitz Sculpture Court will feature displays of important artifacts, including an original four-foot plaster cast of the Iwo Jima monument by sculptor Felix de Weldon, and a display of uniforms from all of the branches of service. A special rotating display of significant objects from the war years will begin with one of the few copies made of the Instrument of Surrender document, signed by Japan in 1945 aboard the USS Missouri an
d last shown in New York in 1945 (on view September 21 &#8211 October 21).

In conjunction with WWII &amp- NYC, New-York Historical will present a full range of evening lectures and conversations that illustrate the dramatic effect of the war on all facets of American life. Among the speakers who will be participating in the series are Ken Follett, on his new historical fiction novel about the experiences of five families during the war, and Robert Morgenthau, in conversation with Tom Brokaw, on his WWII experience.

New-York Historical also will launch its inaugural film series with a selection of classic and new films focusing on life during and after WWII. A screening of the documentary Double Victory (2012) about the legendary Tuskegee Airmen of WWII, the first African-American aerial unit, will feature opening remarks by George Lucas, Tuskegee Airman Roscoe Brown, and Brent Staples.

Among other special guests who will deliver opening remarks before film screenings are Adam Gopnik of The New Yorker on I Was a Male War Bride (1949)- Ron Simon, Curator of Television and Radio at the Paley Center for Media, with author Ian W. Toll on From Here to Eternity– Catherine Wyler discussing her father William Wyler’s film Mrs. Miniver (1942)- and Stanley Donen on On the Town (1949), which he directed and co-choreographed with Gene Kelly.

A richly-illustrated 80-page essay with the same title as the exhibition will be written by Kenneth T. Jackson and published by Scala Publishers Ltd (October, 2012).