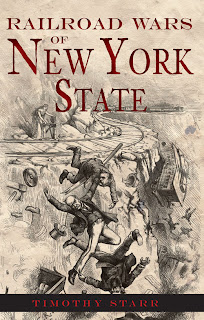 New York’s railroads were born of the cutthroat conflict of rate wars, bloody strikes and political graft. The railroad wars began as soon as the first line was chartered between Albany and Schenectady when supporters of the Erie Canal tried to block the new technology that would render their waterway obsolete.

After the first primitive railroads overcame that hurdle, they began battling with one another in a series of rate wars to gain market share. Attracted by the success of the rails, the most powerful and cunning capitalists in the country—Cornelius Vanderbilt, Jay Gould, Daniel Drew and other robber barons—joined the fray.

Timothy Starr was born in Danbury, Connecticut, and grew up in Hebron, New York. His first book was written in high school, a novel called The Meatloaf Incident and Other Adventures that is based on his experiences in a rural community. After receiving degrees in history, accounting and business administration, he moved to Saratoga County.

Several prominent ruins around the town of Milton piqued his interest and led to the writing of his first nonfiction books, titled Lost Railroads of the Kaydeross Valley and Lost Industries of the Kaydeross Valley. When he discovered that several important innovations were developed locally, other projects unfolded relating to the inventions of Ballston Spa, Saratoga County and the Capital District. A lifelong interest in railroading led to three books that describe the history of railroads within the Capital Region of New York.