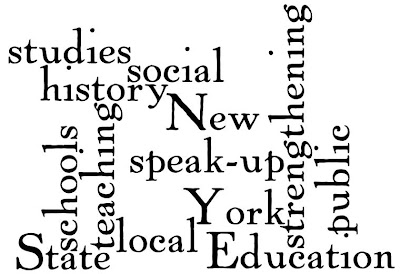 If you have an opinion on whether or not New York State and local history should be taught in our public schools, now is the time to speak up.

As noted on September 17 here at the online news magazine New York History, the State Education Department has released a draft version of the “New York State Common Core K-8 Social Studies Framework” for review and comment until October 11 [online]. There is a link there for people to submit comments. After revision, the document will go to the Board of Regents for adoption as state education policy.

The issue is important. This document will determine whether New York students study the history of their state and communities.

This is a long (85 page) document with a great deal on literacy and language arts, paramount concerns of the “Common Core” movement.

Two sections of the review draft may be of particular interest to the New York history community.

“Grade 4: Local History and Local Government” (pp. 48-56) introduces New York and has few themes on New York history, e.g., Section 4.11, under “Key Ideas” notes that “Major areas and events in United States history have impacted and been impacted by New York and its citizens.” It notes that New York became an economic power in the U.S. and a major center for social change, culture, and the arts. This part of the document is promising, but limited. Moreover, even if there were more coverage, we can’t expect 9-year olds to achieve an in-depth understanding of the rich history of their complex state. Despite the title, there is nothing apparent in this section about local history.

The current Grade 7-8 curriculum includes U.S.and New York history but New York receives very little coverage. It had been hoped that this revision might remedy the weakness, perhaps even restoring a full year of New York history at the middle school level, which was the case years ago. But this draft moves in the opposite direction. In the draft, the sections “Grade 7: The United States and New York History I” and “Grade 8: The United States and New York History II” (pp. 72-95) have “New York” in their title. But these sections are actually about U.S. history. In fact, New York is mentioned only once in these sections, in 7.10.b under “Conceptual Understandings:” “The geography of New York State permitted the development of the nation’s most efficient canal system which led to the emergence of New York City as the nation’s economic leader, surpassing other cities.” That apparently is a reference to the Erie Canal, but it is not mentioned. The document doesn’t even indicate that it was New York that built and ran the canal. Nor is any other event, leader, document, or development in New York State history mentioned.

New York State can do better than this.

Students graduating from our high schools should have at least a basic understanding of the history of their own state and communities. That builds civic awareness and good citizenship. Including New York State history would also support other Common Core objectives such as understanding historical significance, documentary analysis, understanding of continuity and change in history, and analysis of cause and consequence.

It would also align with other Education Department responsibilities and programs such as the State Museum, State Archives, State Library, chartering of historical societies, museums, and libraries, and New York’s officially designated local government historians, who work with the State Historian in the State Museum. They are dedicated to promoting state and local history.

You can read (and link to) previous posts at New York History on this topic here.

4 thoughts on “Should We Teach NY State and Local History?”