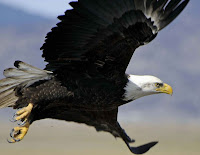 While collecting materials about attacks by animals in the Adirondacks, I came across several stories involving birds of prey. Maintaining a healthy skepticism is important, especially when reading such accounts in old newspapers, where the tendency was to embellish. But I came to realize that bird attacks were not such a rare phenomenon. Nature films offer scenes of birds assailing creatures much larger than themselves and carrying off some impressive loads.

After all, odd things do happen. I once observed a hawk plummeting at amazing speed into the center of the village where I lived. Moments later, the hawk flew past me, a cat dangling from its talons. Decades ago, when ravens were a rarity in the northern Adirondacks, I was dive-bombed repeatedly by several of them as I bushwhacked across the Silver Lake Mountain Ridge. And on three occasions while canoeing, I’ve had very close encounters with eagles (I’ll admit that a couple of them were scary).

Taking all of that into consideration, I reviewed some interesting regional confrontations between humans and birds. In 1888, at Brier Hill (St. Lawrence County), a bald eagle was said to have attacked ten-year-old George Richards. George used a stick to defend himself until older brother Berton, 20, drove the eagle off. Bert later baited a steel trap with newborn calves that had died. He succeeded in capturing the bird, which was held by the Richards family for display.

In 1893, a Bellmont (Franklin County) farmhand working for Frank Winkley was on horseback, rounding up a herd of cows, when he was attacked by two eagles. He was knocked to the ground, where the birds continued the assault. The farm dog came to his aid, and he eventually managed to club one of the birds and capture it. According to the report, the golden eagle’s wingspan was seven feet. It was briefly kept in Winkley’s barn as a curiosity.

Predatory raids on farm fowl were once common. A dramatic case was reported in Chaumont (northwest of Watertown) in 1903 on the farm of Charles Graham. A hen hawk (any hawk that preys on poultry) grabbed a large Plymouth Rock hen, but about 20 feet above the ground, the hen broke free and landed at Graham’s feet. The hawk followed, knocking the farmer down, gashing his face and neck, and pecking at his eyes. Even as Graham stood to defend himself, the bird continued the attack, finally departing when the farmer grabbed a shovel.

Also in 1903, John Sullivan of Jay (Essex County) was set upon by an eagle, eventually driving it off after suffering lacerations to his face. In 1904 came a report from the Bowditch cottage on Upper Chateaugay Lake (Clinton County), where caretaker Frank Nicholson battled two eagles that attempted to make off with some chickens. One of the birds managed to sink its talons into Nicholson’s leg, but he eventually succeeded in “dispatching them.”

In 1909, a Pitcairn (St. Lawrence County, near Harrisville) farmer, Josiah Almtree, offered a dramatic tale of battling a powerful eagle that had lately been harassing his sheep. The victim this time was Almtree’s daughter, who was carried briefly but then dropped “unhurt on the roof of a little building near the barn.” Almtree managed a shot at the bird, which escaped. Of course, “unhurt” wasn’t possible, but I’ll beg the Fox News defense here: “We report, you decide.”

Most such stories are quite old, but a more recent one (though still over 50 years past) occurred in Ausable Forks in 1957. Young Jimmie Camire, while playing with friends, was attacked by a hawk. The bird grabbed his shoulder, but the boy broke free. Under renewed attack, Jimmie’s shouts brought his brother Butch and friend Jeff Hewston to the rescue. They had been cutting small trees nearby, and used an axe to kill the hawk, which they said had a wingspan of 43 inches.

Not all regional fowl attacks came from above. In 1908, Gouverneur’s Louis Boulet owned a particularly raucous Rhode Island Red, a breed that can be incredibly aggressive. (They’ve been known to kill snakes, cats, foxes, and small dogs.) The big rooster’s frequent attacks made it clear the farmer was not welcome in his own hen house. Egged on by frequent muggings and occasional blood loss, Boulet decided this chicken’s goose was cooked, so he had him for dinner.

Skepticism can be valuable, but before deciding how feasible some of those old stories might be, check out some “eagle attack” videos on YouTube. Be forewarned: several are graphic. Some are simply amazing, demonstrating the willingness of large birds to mix it up with creatures of all sizes, even striking a black bear in a tree.