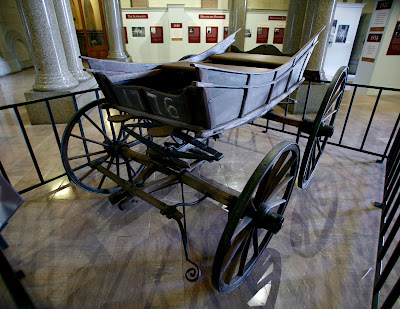 A horse-drawn suffrage campaign wagon used by suffragist Edna Buckman Kearns to organize for Votes for Women is on exhibit at the state capitol in Albany, through May 2012. The artifact of the suffrage movement is representative of the tens of thousands of women nationwide who participated in the 72-year movement to win the right to vote for women.

The story of the Edna Kearns suffrage campaign wagon is detailed in a blog and web site called Suffrage Wagon News Channel (suffragewagon.org), which for the past two years has been publishing news and stories of the Votes for Women movement. Suffrage Wagon News Channel is published by Marguerite Kearns, the granddaughter of Edna Buckman Kearns, and it features the writings and organizing of Edna Kearns who worked on Long Island and New York City as an writer and editor of suffrage news as well as an on-the-ground organizer for the state and national campaigns.

“My grandmother died in 1934, so what I know is from the papers my grandmother saved. As I read my grandmother’s writings and news clippings, I am touched by the dedication and persistence of her generation. We stand on strong shoulders, and this type of strength is something we don’t have to reinvent. It’s part of a collective memory that comes alive when stories of the movement are shared.”

Suffrage centennials have been celebrated in the western states where women first won the right to vote. Oregon, for example, has numerous events scheduled for its centennial in 2012. And New York State is putting preliminary plans in place to celebrate its centennial in 2017. The national centennial for Votes for Women is set for 2020 in the United States.

The exhibit is sponsored by NYS Governor Andrew Cuomo at the state capitol to recognize women’s accomplishments and as a way to make history more real for his three daughters.