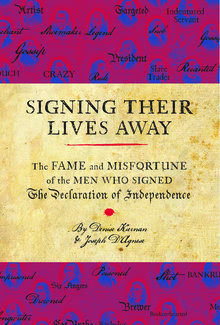 With their first book, Signing Their Lives Away, authors Denise Kiernan and Joseph D’Agnese introduced readers to the 56 men risked their lives and livelihood to defy King George III and sign the Declaration of Independence. Some prospered and rose to the highest levels of United States government, while others had their homes and farms seized by British soldiers. Signer George Wythe was poisoned by his nephew- Button Gwinnett was killed in a duel- Robert Morris went to prison- Thomas Lynch was lost at sea- and of course Sam Adams achieved fame as a patriot/brewer

Now Kiernan and D’Agnese have turned their attention to the 39 men who put their names to the U.S. Constitution in Signing Their Rights Away: The Fame and Misfortune of the Men Who Signed the United States Constitution (Quirk Books, 2011).

The United States was on the verge of a vast political collapse. The Articles of Confederation were too weak to govern such a large new nation. Some citizens feared the idea of a strong central government. After Shay’s Rebellion, the wealthy feared anarchy and mob justice. Many predicted a civil war. But 1787, representatives from the states converged in Philadelphia to hammer out a governing system that would work. Many of them were battle-hardened militarists who’d served in the War- others were profound legal scholars. Many of them were just as quirky and flawed as the elected officials we have today.

• David Brearley of New Jersey wanted to erase state boundaries and start over.

• Henry Williamson of North Carolina was said to believe in aliens.

• Robert Morris of Philadelphia went to prison and died penniless.

• Gouverneur Morris of New York, a peg legged playboy, once set his sights on Dolly Madison.

With 39 mini-biographies, a Constitutional Cheat Sheet, and a dust jacket that unfolds into a facsimile of the Constitution, Signing Their Rights Away offers an entertaining and enlightening narrative for history buffs of all ages.