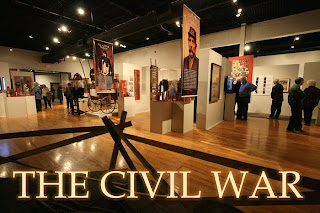 150 years ago shots were fired on Fort Sumter off the coast of South Carolina signaling the beginning of the Civil War. A century and a half later, Roberson Museum and Science Center has assembled hundreds of objects and stories to tell the story of how that conflict affected this area in a new exhibition appropriately named The Civil War.
The exhibition opened on September 30, 2011 and remains open for the next two years in the Sears Harkness Exhibit space at Roberson. The 4,000+ space of the room will be filled with hundreds of objects related to the Civil War. The story of The Civil War is one that reached beyond the boundaries of Broome County. This is a truly regional exhibition telling the story of how this horrible conflict affected the people of Broome, Chenango, Cortland, Delaware and Tioga Counties in New York and Susquehanna County in Pennsylvania.

The exhibition details that issues and conflicts that led to the Civil War. Covering the period of 1820 to the twentieth century, The Civil War looks at how the issues of slavery and states’ rights fueled the differences between the people of the North and the people of the South. Sectionalism and secessionism were the beliefs of people from both regions because the Civil War truly split families with brother fighting brother.

The Civil War is using items from many different collections – both private and public. Museums and collectors from many areas are contributing their items to help tell this important story. Thousands of people from this region went off to war representing 50% of all the eligible men in those counties. Thousands never made it back home alive. It is the intent of this exhibition to tell this story – the story of those people who sacrificed by leaving home to defend the Union. It is also the story of those people who stayed behind and kept society together while waiting for the Johnny to come marching home.

The visitor to the exhibition will be greeted with an impressive array of Civil War related items, but there is much more for the viewer. A series of video profiles will tell the story of the people who were directly involved in the Civil War. People ranging from politicians to generals – from a too young boy who enters the war to a woman fighting to keep her family together tell their stories. These profiles have been created by WSKG and will guide the visitor through each section.

The Civil War brought terrible changes in the technology of killing with advancements in armaments. The improvements in medicine also were found throughout the war, as efforts to lessen the numbers of soldiers dying of wounds and disease. Despite these advances, over half of the 620,000 soldiers who died in the Civil War died from disease. Technology also changed how we view war, with the improvements and advances in photography. We have images of the war made famous by people like Matthew Brady, whose business partner was from Tioga County. These technological changes will be depicted and visitors will have hands-on experiences in some of those areas.

We know that millions of men fought in the Civil War, but what was it like to be a Billy Yank in the field. Visitor to The Civil War will have an opportunity to experience that by going through the military encampment. Walk through the field to the camp and look into the tents. See what games the soldiers played and the music that kept them entertained in the hours in between battles.

The Civil War ends in 1865, but its results linger for generations. Monuments on courthouse lawns, GAR posts throughout the region are only part of the story. Increasing industrialization in the northeast led to large factories, more employment and increasing population. Much of this built upon the assembly-line system used during the Civil War. The visitors will conclude their trip in time by viewing countless faces of war and the knowledge that for a moment in time our country was split in two and was never the same again.