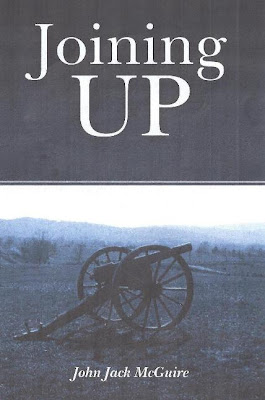 In time for the sesquicentennial of the Civil War Jack McGuire offers Joining Up (Self-Published, 2011), a new historical novel memorializing Brooklyn’s famous red-legged devils of the Fourteenth Regiment through fiction. The book offers readers insight into the abolitionist regiment that became a favorite of Abraham Lincoln.

McGuire evokes the powerful words of William Burleigh- “The gallant Fourteenth forget them not: our gallant boys who, for the nation’s life, stood amid the battle grime and noise and were baptized in its flames and blood,” setting the tone for the novel, which depicts the gallantry, bravery, and commitment to justice of the Fourteenth.

Joining Up chronicles the tale of two young boys, Will and Bobby, who run away from Saint John’s home in Brooklyn, inspired by the image of Will’s brother, Andrew, in uniform. The boys are inspired by the dauntless spirit of the Fourteenth, driven by the desire to become a part of their noble cause. McGuire addresses the mystique of their “red legs” as Will recounts a story that he had been told to his friend, Bobby- “The way I heard the story is they fought one battle in Union blue and got whipped good. They been wearing red ever since.”

The two teenage boys, backs still raw from a whipping, make their escape from the Brooklyn Orphanage to the Red Legged Devils of the Fourteenth Regiment.. En-route to the Civil War battlefields Bobby and Will become mule train drivers with a scalawag muleskinner who runs supply wagons for a Massachusetts Regiment. The search for the Fourteenth New York leads the runaways to the farmlands of Pennsylvania where Robert E Lee is about to launch his armies of Northern Virginia against George Meade’s Union Army of the Potomac. It’s the eve of the biggest battle of the Civil War when the runaways finally don Union Blue.