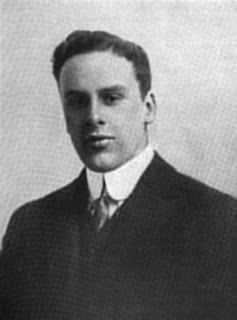 War heroes come from all walks of life, and are deemed noteworthy for all sorts of reasons. In April 1918, during World War I, the North Country was justifiably proud of five lesser headlines in the New York Times beneath a bold proclamation: “Plattsburg Youth A Transport Hero.”

The story was particularly unusual for one main reason—though the youth was a lieutenant in the infantry, he and his foot-soldiers had performed heroic deeds with no land in any direction for perhaps 1000 miles.

Plattsburg (no “h” used in those days) was a principal military training facility, and many death announcements during the war ended with a single, telling entry: “He was a Plattsburg man.” In this case, the Plattsburg man in question, Charles Dabney Baker, was still very much alive and receiving praise from both sides of the Atlantic for astute leadership and remarkable calm during a crisis situation.

The odd circumstances surrounding Baker’s citation complemented his unusual path from childhood to the military. Historically, the vast majority of fighting men do not come from affluent backgrounds. Men of money and power have often been able to protect their children from serving. Poorer folks, on the other hand, often joined for the guaranteed income and the financial incentives dangled before them. A few thousand dollars was nothing to a person of wealth, but constituted a small fortune for someone in need.

Charles Baker was certainly part of an affluent family. He was born in Far Rockaway, Long Island in 1891, the son of a Wall Street banker. When he was but eight years old, the family household of four children was supported by a live-in staff that included two nurses, a waitress, a cook, and a chambermaid. A kitchen maid and a laundress were later added. Life was sweet.

Charles graduated from Princeton in 1913 and went to work for the Bankers’ Trust Company in New York City. It was an ongoing life of privilege, but after two years in the banking industry, he opted to join the military. Following a stint on the Mexican border, he was promoted to the rank of sergeant, and then trained at Plattsburg as America finally entered the war in Europe.

For Baker, who was prepared for battle, disappointment ensued when his regiment was ordered to France without him. He was instead tasked with commanding a detachment of men assigned to care for 1600 mules and horses that were being shipped to Europe in support of the troops.

As the journey began, a series of problems developed, culminating in a crisis situation in the middle of the ocean. A powerful storm threatened the mission, with winds estimated at 80–90 miles an hour. The ship was badly tossed, and a coal port lid failed (it was said to have been the work of German spies who had loosened the bolts when the craft was docked).

As the ship began to flood, chaos and disaster loomed. Baker, the highest ranking officer aboard, took charge of his landlubber crew and whipped them into action. The partially flooded ship rocked violently, and its precious cargo suffered terribly. A sailor on board later reported that many of the horses and mules “were literally torn to pieces by the tossing and rolling. Their screams of agony were something awful to listen to.” A number of others drowned.

Under Baker’s orders, bailing crews were assigned, dead and living animals were tended to, and the remaining men battled to keep the ship afloat. Days later, they limped into port and assessed the damages. It was determined that 400 animals had been lost, but the remarkable response by Baker and his infantrymen resulted in the survival of 1200 others. A complete disaster had been averted, and after delivering their cargo, the 165th Infantry was soon on the front line in France.

The story of the ocean trip might have remained untold except for brief mention that appeared in some newspapers. Among those reading the report was a sailor who had shared the voyage. He contacted the newspapers, and soon the story was headline news, praising Baker and his soldiers for great bravery and heroism under extreme conditions.

While the story gathered momentum, Charles and his men were otherwise occupied, already engaging in trench warfare. Just a few weeks after joining the fight, the 165th was pinned down under withering bombardment by the Germans. As Baker encouraged his troops, a shell exploded nearby, puncturing his eardrum.

For three days the barrage continued. Against the advice of his men, Baker endured the pain, refusing to withdraw to seek treatment. He felt his troops were best served if he remained on duty with them.

In early May it was announced that the French government had conferred upon Baker the Croix de Guerre medal, accompanied by the following citation: “First Lieutenant Charles D. Baker showed presence of mind and bravery during a heavy bombardment of nine-inch shells. Went calmly to his post in the trenches despite a destructive fire, assuring the safety of his men and locating the enemy’s mortars which were firing on the positions.”

Baker was forced to spend time recovering in the hospital. Despite his adventures, the frequent praise, and the French medal, Baker was described as humble, unassuming, and much admired and respected by his men. Soon he was back on the battlefield, right in the thick of things.

In July 1918, less than six months after Baker’s arrival in Europe, the 165th was involved in heavy fighting on the Ourcq River about 75 miles northeast of Paris. The Germans had the better position, and Allied forces suffered very heavy casualties as machine gunners cut down hundreds of men. Some of the Allied commanders took to an old method of moving forward by sending only two or three men at a time, backed by intense cover fire. It was difficult and deadly work.

On July 29th, while involved in fierce fighting, Charles Baker was badly injured by machine-gun fire and was once again removed to a base hospital in France. Nearly six weeks later, on September 12, he succumbed to his wounds.

From the crisis on the high seas to his eventual death on the battlefield, barely eight months had passed. It was a tragedy that was repeated millions of times during the war. And in this case, it was duly noted: Baker was a Plattsburg man.