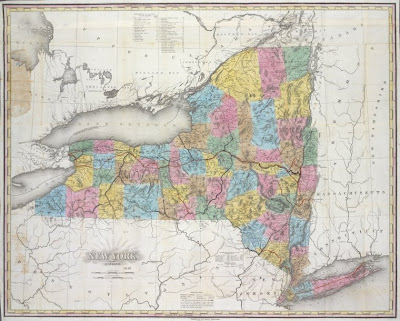 Based on the county history conferences which I initiated in the Hudson Valley this year, I would like to take this opportunity to share my experiences and to offer some suggestions on changes which should occur. I am starting with the County Historian position since that position was my point of contact for proposing each conference. I dealt with 8 counties in the Hudson Valley and while they may not be a fair sample of the 62 counties in the state, they are a reasonable number upon which to base my comments. Also it should be noted that I was the constant, meaning I was the same person who interacted with all 8 counties.

An overview of the situation reveals the following:

a. One county did not have a County Historian but a conference was held anyway. This situation should be resolved with the election of a new county executive November 8. Ironically legislation passed this year to recognize the upcoming 300th anniversary calls for the participation of the County Historian. There is no real county archives facility either.

d. One county had a County Historian who approved the County Conference, retired about two weeks before it, and did not participate in it. The new and much younger County Historian attended the meeting and afterwards instituted brown-bag lunches in the historic building at the county capital where the office is located. The job description is impressive.

1. The position should be filled in all counties and by an individual human being, not an organization.

2. The County Historian should be responsible for the county records or work closely with the person who is.

3. The County Historian should work closely with the County Tourist Department. The proposed legislation, the Travel Regional Investment Partnership (TRIP) Act to promote domestic tourism by partnering public and private dollars through a competitive matching grant program within the U.S. Department of Commerce with New York Senators Gillibrand and Schumer as cosponsors is an example. Heritage tourism represents an underutilized asset in the New York.

5. The County Historian should work closely with the municipal historians in the county including (a) having a up-to-date list of who they are, (b) an email contact list either with a municipality email address or a personal one if none is provided by the municipality, and (c) through informal gatherings.

6. Job descriptions should be standardized as much as possible and posted on the County website. The position should be listed in the County’s list of departments.

7. The State Historian should prepare an annual report on the state of the County Historians based on the annual reports received from each of them.

Since many private county historical societies may predate the creation of the public county historian position, there often may be a close relation between the two as seen in the above examples. Exactly what that relationship should is a subject worthy of discussion as well.

A survey of where things stand at the moment would be in order, but who would conduct it? The following message has been on the website of The Association of Public Historians of New York State website since prior to the county conferences which began in March and I searched for lists of municipal historians in the counties to invite them to the conferences.

&#8220We are currently in the next phase of our database/search overhaul. All listings in the &#8216-Find a NYS Public Historian’ web search have been temporarily removed. Over the next month, we will be reloading this online search function Region-by-Region as all municipalities and their Historian appointments are verified. As each Region is uploaded, we will send out a notice, so members can also verify their information.

We thank all of our members for their patience during this process. It is taking some time, but we believe that the effort and end-result will be well-received and prove very useful to APHNYS members, researchers and the public at large.

If you have any additional questions about the database/search function overhaul,
please contact the APHNYS Office at aphnys@caphill.com.&#8221