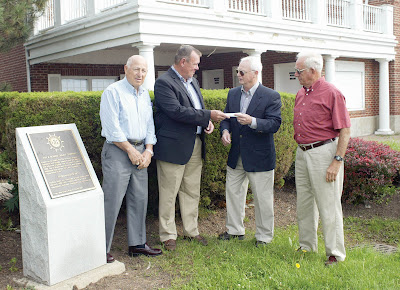 “Geneva Growth’s donation represented delivery on a promise made several months ago with the hope that our group’s early show of faith would lead to broader financial support from the community at large,” said Beckley.

Oben said the funds will be used to organize and support the multi-million dollar Preserving Our Boating Heritage campaign to outfit the Museum on the Geneva waterfront.

“We partnered with Geneva Growth in 2009 to bring the Boating Museum to Geneva, and they have provided invaluable support to the Museum during the past three years,” said Oben. “This extremely generous gift is the latest manifestation of their belief in the importance of this project for the City of Geneva.”

The Boating Museum is in partnership with the City of Geneva to establish a permanent home on the Geneva waterfront in association with the Visitor Center. The building, which will be located on the current Chamber of Commerce site, is being enabled by a $2-million grant provided to the city by state Sen. Michael Nozzolio.

“We have believed in the viability of the Boating Museum and its benefit to Geneva from the start,” said Beckley, “and we challenge others to join us in providing funding for the museum’s start up. This is a great achievement as Genevans join together for a waterfront attraction that will bring visitors to the city as well as enhance the lakefront experience for local people.”

Current Geneva Growth President Dave Bunnell said that the organization views its mission as supporting local economic development projects and strives to put its money to work in the community. “We brought the City and the Boating Museum together several years ago and we are now pleased to offer financial support as the project advances,” said Bunnell.

Bunnell noted that Geneva Growth also supports the Museum in another way as three of its members, Beckley, Scalise and himself, serve on the Boating Museum board.

Starting the ball rolling to raise seed money for the museum were contributions totaling $15,000 from members of the Museum’s Board of Directors. The Finger Lakes Times, Hobart and William Smith Colleges and the Geneva IDA all have donated in-kind contributions valued at $10,000. The Geneva Business Improvement District has also committed $10,000 predicated on the Museum first meeting a fundraising goal set by BID.

Joanne Wisor, IDA Chair, commented, “The FLBM inventory of classic, locally built vessels is in temporary storage at the Geneva Enterprise Development Center (the old American Can building on North Genesee Street) until its new quarters on the lakefront are ready. The board of the Geneva IDA, which owns the GEDC, has offered the space at no cost to the FLBM to help ensure the Museum’s successful location in the City of Geneva.&#8221

The Boating Museum has assembled a collection of more than 100 wooden boats built in the Finger Lakes over the past 100 years, as well as numerous related artifacts and extensive reference material.

Portions of the collection will be displayed on a rotating basis within the new facility, but President Oben emphasized that there will be a lot more to the museum than viewing boats because education, restoration and preservation are the key elements of the museum’s mission. Also featured will be boat rides on Seneca Lake, active on-water programs including sailing and small boat handling, interactive workshops and displays to engage visitors in the design and construction of boats and boating history materials and programs.

Additional information about the Boating Museum may be found on its website.

Photo: Phil Beckley (second from left), former president of Geneva Growth, presents a check for $10,000 to Bill Oben, president of the Finger Lakes Boating Museum. Also participating were Vince Scalise (left) of Geneva Growth, and Ed Wightman, (right) vice president of the Museum. The presentation took place alongside the marker commemorating the location of the Fay & Bowen Engine Company, which built wooden boats in Geneva from 1904 to 1929.