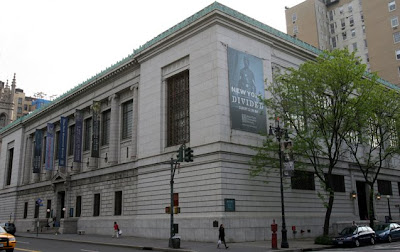 “Inquisitive viewers will get the answers they’ve been looking for as the New-York Historical Society shares its vast knowledge and archive in our new series,” said Diane Petzke, general manager, NYC Media. “As part of our ongoing efforts to partner with local cultural organizations, we’re delighted to bring this fun and engaging perspective of City history to New Yorkers.”

“We are pleased to partner with NYC Media as we count down toward the re-opening of our galleries 90 days from now,” said Louise Mirrer, president and CEO of the New-York Historical Society. “As the oldest cultural institution in New York City, we have a history that is closely tied to the history of the City as a whole. What better way to celebrate than by exploring the fascinating, sometimes surprising questions put to us by curious New Yorkers and visitors?”

On Veterans’ Day, Friday, November 11, 2011, the New-York Historical Society will throw open its doors as never before after completing a three-year renovation of its Central Park West building. The face of the institution—the first museum established in New York—will be transformed as visitors of all ages are welcomed to this great cultural destination. Visitors will experience brand-new gallery spaces that are more open and hospitable, both to major exhibitions and to a vastly expanded public. Highlights include, a multi-screen presentation of American history seen through the lens of New York City- the DiMenna Children’s History Museum, the first of its kind in New York, where the past comes to life through the stories of real children- a new museum restaurant operated by Stephen Starr Restaurants in a light-filled, modern space- and a permanent exhibition taking visitors on an interactive journey from colonial times to the September 11th attacks, incorporating high-definition digital screens and original artifacts. For more information about the New-York Historical Society’s re-opening, visit nyhistory.org.